I'm a huge fan of Lovecraft and of the Cthulhu mythos in particular. I've also enjoyed many stories that expand upon the theme. This collection of short stories does that with varying success, with a central theme of war to connect them besides the mythos.

On the plus side there is a good variety of stories here, ranging from ancient times and even a space setting in the far future. As well as varied settings there is a solid array of plots, so each tale did feel distinct from the others.

And some of the stories are simply fantastic, and if it had just been them then it would have been a five star read. Unfortunately, as is sometimes the case with collections, the quality is uneven through the book. In fairness I didn't dislike any of them, and was able to finish all of them, but some just stood out noticeably from the rest.

Two stories that shined for me were The Ithiliad by Christine Morgan, and Sea Nymph’s Son by Robert M. Price. In both cases they blended the strengths of the mythos, but also something fresh to them.

As an ensemble I did find it a bit heavy going. You might appreciate the book better if read by dipping in and out over time, rather than in one go. It's worth a look if you enjoy Lovecraft's work, but if you're a newcomer then there are tastier feasts out there. 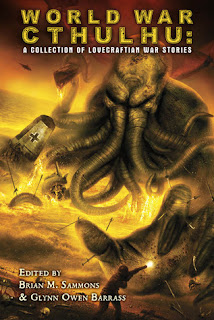