For this week's Flashback Friday feature I revisit one of my favourite songs and in particular the lyrics that make it so:


Back in the eighties I started getting into a band called Sabbat. They're a British thrash metal band (although the label doesn't really do them justice) noted for their lyrical talent. The first song of there's I heard was a song called 'Blood for the Blood God' which came as a free flexi disk in White Dwarf magazine. This wasn't the only foray Games Workshop into music, they were also heavily involved in Bolt Thrower's 'Realm of Chaos' - a must for fans of grindcore and the 40k universe.

Sabbat's first album 'History of a Time to Come' was a real eye-opener for the scene. The lyrics for the songs were almost poetic, but they were nothing compared to their second album. 'Dreamweaver' was based on a book called 'The Way of the Wyrd' by Brian Bates. The book is about a young monk sent to Saxon England to learn more about the Saxon gods and their followers to make the conversion to Christianity easier. 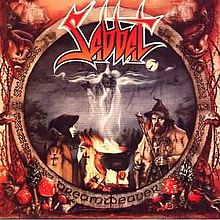 The story follows Wat Brand as he discovers Saxon beliefs and their views on the world. The book is great and the album is a fantastic adaptation. The whole album is full of excellent songs, but the one that really stands out is near the end.

The song 'Mythistory' tells the conclusion of the story where the monk is searching and finds his soul upon the way of the wyrd. His soul is represented as a woman and as he meets her we have the lyric:

Sister, mother
Virgin, whore
She is all these,
and yet still more
That I could hope
to understand
She take's my heart
I take her hand

So he's found his soul and found it everything that could and should be, he accepts her, but why?

And can you blame me?
Is it such a crime?
To crave for one small piece of Heaven
That I can call mine.

The truth is that the most wonderful thing about him is the soul within him. Later we discover the soul is a bounty from the nature around us, summarised in one the best written verse for the seasons:

Corn is the gold that will shine in the summertime
Leaves are the emeralds you find in the spring
In autumn they turn
and as copper they burn,
then they fall like the diamonds that bleak winter brings.

Posted by Michael Brookes at 13:27