Book Review - What It Means To Survive by Lucas Bale

Lucas Bale impressed me with his debut novel The Heretic but his writing in this short story/novella raises my appreciation to another level. This is a science-fiction tale of survival in a harsh environment that keeps you in its grasp until the end.

For me it worked on three levels. I'm a big fan of science fiction, but this story is such that it doesn't force itself onto the reader. It provides an interesting setting and with it an imaginative foe. So much so that I wished that the book had been longer so I could have learned more about the creatures they encounter.

From a character perspective the two leads are strong and well developed even in such few pages. Again I would have loved to have spent more time with them, especially as they had quite a deceptively complex dynamic between the two of them.

Last but not least was the quality of the writing. It really stood out for me with its craft and told the story that was over too quickly. As you've probably guessed by now my only issue with the book was that it should have been longer! 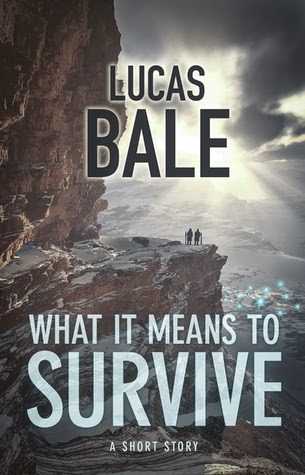 McArthur's World is a frozen planet which has been bled dry by mineral mining corporations for three decades. When there is nothing left but ice and snow, the last freighter lifts off carrying away every remaining human being. When it crashes in a wilderness no one has ever returned from, there are only two survivors: a miner who wants to get back to the children he has not seen for two years, and the woman who forced him to come to McArthur's World in the first place.

They think they're alone, until the shrieks in the darkness come.

What It Means To Survive is a short science-fiction story by Lucas Bale.

Click here to buy What It Means To Survive from Amazon (and it's an excellent sci-fi survuval tale)
Posted by Michael Brookes at 13:31