To celebrate the release of his latest book 'Chaste' Jesse Teller provides us with a guest post about his Ten Greatest, Terrible, Beautiful, Ugly Movies:

Let’s talk about the terrible horror movies. There is no place in this conversation for classics like The Exorcist. We are not interested in The Shining or anything Freddy, Jason, or Michael. I’m not ready to talk about any of them because those are good movies. Today, we are looking at the terrible movies that some of us love, some of us abhor, and others, like myself, can’t get enough of. Let’s talk about the ten greatest B (or C, D and F) horror movies ever made.

I have a crew made up of four guys and myself. We call ourselves Bad Movie Inc. We have everything a club should have: a President, Chris; a Vice President, Matt; a Secretary, a different Matt; a Treasurer, Joe; and me, the Sergeant-at-Arms. We get together and watch the worst movies we can find because no one else will watch them with us, (except my wife, she is cool) and because we can see the value in things like these.

I love these kinds of movies because these people didn’t let anyone tell them that they couldn’t do it. I am an indie writer. I published my book myself. These moviemakers knew no one was going to make their movies, and they did it themselves. A few of these movies were made by big houses that will throw out whatever. A lot of these movies were made with big budgets with poor planning and bad writing. But most of these movies were home projects put together by groups who wanted to get their work out, no matter what that meant. That, I can respect.

You can’t judge a piece of art by other pieces. You have to judge a piece by what it is meant to be. Photo realistic painting is amazing, but you can’t call Picasso crap because his work is not as realistic as Zhi Lin’s Five Capital Punishments of China. Taylor Swift is not trying to be Mozart. She is trying to make pop music. And as pop music goes, she is nailing it. That is what makes her work good music. She is shooting for a result, and she is hitting it. These movies are not trying to be Citizen Kane. These filmmakers are trying to make bad horror movies. And if they are trying to achieve that goal, they have reached it. In that way, these movies are fine art.

I will share with you now the ten greatest, terrible, beautiful, ugly movies I have ever seen—special movies I think everyone who writes or does any creative work should watch.

10. Re-Animator: Ok, the thing is this. Don’t ask any questions—that will get you in trouble. The minute you start asking questions, everything falls apart. Don’t ask how the severed head keeps blood flowing through itself. Don’t ask any of the thousands of questions about possibility or reason that this movie begs. Just lay back and let go, like slipping into a warm bath. That’s what you should do. Like a warm bath. Actually, just take a bath and skip the movie.

9. Zombeavers: This is a wonderful movie that doesn’t take itself too seriously. The subject matter is plain by the title. A group of college students out in a cabin in the woods are attacked by Zombie Beavers. It has a pretty big budget, I think. And it is blessed with the greatest ending to any movie I have ever seen. Wait until you get there. It’s worth watching the movie to get to the ending. It’s genius.

8. I Am Omega: Let me read you the description on the back of this movie. Yes, I own it. “The Lone Survivor of a deadly plague is doomed to an eternal battle with mutant creatures that control the earth.” Flesh-eating mutants? Sign me up. This movie is so bad that it made me wish I didn’t have eyes. But then, I would have heard it, which I’m not sure is any better. A great bad movie should make you think about stepping in front of a bus. This one is that movie. Good luck.

7. Decadent Evil: Don’t need to say much about this one. Again, I will read you the description. This description is why the eight pack was bought for me, I think. This is amazing. “A vampire named Morella feasts upon her strip club clientele while housing her ex-lover Marvin part human/part reptile in a bird cage.” Run out and get it. It is so much worse than it sounds.

6. Children of the Corn III Urban Harvest: This franchise will not die. After this movie, it maybe should have. The secretary of Bad Movie Inc. has the job of researching every movie we watch. He said that in 2017, they are coming out with Children of the Corn IX. Can’t wait to have them all.
5. Sorrow Creek: Not really sure what happens in this movie. Cursed town kills a bunch of college students. Lots of really bad acting. Lots of really great fun. If you are seeking an action-packed movie, just don’t. The bulk of the movie takes place in a house, and the murders take place outside. There is a really cool thing that happens to the car, though. That part is kind of creepy. Check it out. It’s terrible.

4. The Dead Sleep: Maybe you shouldn’t watch this one. I don't know. I bought it this summer. It’s October and I have already watched it five times. Each time, I think, “This is the time I’m going to rip my eyes out.” But I never do. The daughter is not a bad actor. Thirty-six of the fifty lines that the wife is given are just saying the husband’s name over and over. It is so worth the watch. Settle in for a great movie. Bring a book.

3. Troll II: This is actually a cult classic. If you are talking about bad movies, you have to say this name. It is about goblins. There is not a troll in the entire movie. Look for the character Creedence. She is marvelous. This movie is not for vegetarians. Chris, the President of Bad Movie Inc., is a vegetarian. Evidently, they are monsters. And by the way, coffee is the devil’s drink, stick to milk.

2. Meridian: This movie is so bad that I am pretty sure Secretary Matt stole it so he would never have to watch it again. It is right now under his mattress, or buried in his yard. He may have melted it down into a smaller chunk so he could flush it. When I said we were going to get it and watch it a second time, he yelled “No!” This is the guy who brought Troll 2 to the group. Muscle through it and get to the end. It will have you scratching your head, and wishing cameras hadn’t been invented.

1. Redneck Carnage: Without a doubt, the best movie on the list. I have seen this movie ten times. It was filmed by Count Zee. I went to high school with this guy. He wrote, directed, produced, edited, and did the catering for this film, I think. He is a genius. When he made this movie, he was trying to make a cheesy horror movie. He knew what he had, and he knew what he was making.

Good luck with this list. I hope you have as much fun with it as I did, and maybe you can find a group of people like Bad Movie Inc. to enjoy them with. 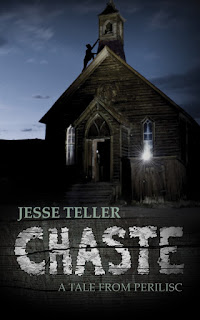 Chaste: A Tale from Perilisc
by Jesse Teller

When her devout parents died, Cheryl turned her back on her god. Years of denial and self-loathing have defeated her. Her life consists of taking orders and succumbing to abuse. A group of strangers stops in Chaste for the night, but an unnamed threat is preying on the town. Tragic deaths have become more and more frequent. Cheryl wants to protect these travelers, expose the evil force, and save her fellow citizens, but she must find a way to believe in hope.

Posted by Michael Brookes at 13:17