The second Five to Five Thousand challenge has been accepted by Dan Grubb, head honcho at Fantastic Books Publishing - you can see the books they have on offer here: http://www.fantasticbooksstore.com/

If you didn't catch the first post then this feature is all about predicting events, or trends in 5, 50, 500, and 5,000 years time. I did the first one, and it isn't an easy challenge!

And now handing over to Dan...

A very tricky exercise. So tricky in fact that I’ve decided to try a diarised version of a single, possible future in the hope that others might be tempted to do the same.

In the interests of transparency I realised when I’d finished that I have made a very 21st Century human error and completely forgotten about the threat of global warming which, as you will read, becomes less of a problem in five millennia than it is now…

The rise of VR technology to augment our lives, coupled with advancements in medical technology and AI use in areas such as driverless cars and public transport lead to a shift away from human government and the policy makers are slowly replaced by legal professionals who spend their time arguing the positives of an AI government. The GTEP (Global Threat Elimination Programme) is formed using the drone-based defences of the US, Germany and China. Its reach is global. The legal teams go into overdrive dealing with illegal assassination claims from Russia and the middle-east.

Global economies start to flourish and the stock markets begin to show signs of growth across all sectors.

Genetic modification has removed some of the most terrifying diseases from the human population and extended the average lifespan significantly. The first octogenarian mother gives birth. Plans for the first augmented Olympics are approved and work begins on genetically modifying athletes for the 2072 games. Interestingly, double leg amputees are banned from competing in the augmented games in the same way they are banned from the standard games as material technology used in their blades, twinned with the lower weight caused by their amputations, still ensures they can move much faster than even their genetically augmented counterparts over 100m.

SpaceX’s moon base, set up in 2029 to help maintain various lunar satellites and to perform low gravity experiments, opens its doors to tourists for the first time. The drone choreographed zorb trip from the landing spot to the base is instantly hailed as one of the most fun and exciting ways to cross a landscape, driving a tourism flood to the base. Elon Musk’s AI persona ‘EM’ (following his death in the Dragon 11 test flight of 2018) approves of opening the base to tourism saying ‘the only way to get to and colonise another world is to engineer a way to get normal, everyday folks there’.

The sub-Saharan forest programme gains ground as new hydroponic technology is introduced to the forest floor, leading to spontaneous, year round river systems flowing beneath the young canopy. Wars to claim this new, fertile land are kept under control by the GTEP (Global Threat Elimination Programme) using AI drones controlled by the global task force. The population vs viable fertile land ratio (now held as the yard stick for the push towards the elimination of poverty wolrdwide) takes an

encouraging step toward the positive. Cynics conclude this is entirely due to the millions of deaths caused to the local populations being wiped out by the GTEP.

The first probe arrives at Proxima B. The return signal, carrying both optical and other scientific data, is expected to reach Earth by 2075.

Mankind has colonised the solar system, following the unexpected plans full of technological advancements driven by the incoming signal from Proxima B. Plans for the new drive systems found in the signal far outstrip the performance of even the most advanced human built systems. Bases arrive on the Jovian moons of Titan, Europa and Io and Ceres is mined for both water and important metals which are then ferried to and refined on one of many Martian industrial complexes. Mars becomes the ‘second Earth’ outpost of humanity.

Signs of a very high frequency communications network are detected outside the orbit of Pluto. Probes are sent to investigate.

The vast majority of the human race spend their time in augmented reality pods having their every nutritional and physical need catered for.

Procreation is tightly controlled and entirely illegal outside of ‘life labs’.

Control of the human race’s future is 100% AI controlled.

GTEP now have millions of humanoid officers who patrol every facet of human activity both on and off the Earth.

Following the magnetic deletion of the final human AI control system on Mars’ largest city, the Xanthorians claim the total destruction of the human race from their home system of what humans used to call Proxima Centauri. Emperor Yan tightens his control over the Galaxy and states that the asteroid impact that destroyed all life on Earth a millennia ago was a sign that the grand Imperial Vision was the correct one.

Yan vows to sterilize every system in the galaxy that does not immediately bow to Imperial control and pay tribute.

Voyager 1 is intercepted by the Mallorians, the true architects of the galaxy, who after researching the plucky satellites origins mourn the loss of the human race and begin planning to solve the long considered ‘Xanthorian problem’. 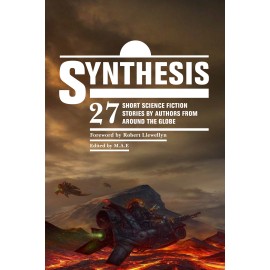 A collection of 27 short science fiction stories from around the globe.

The collection gives a charitable donation to the Freedom from Torture charity (www.freedomfromtorture.org).

Posted by Michael Brookes at 12:53