Book Review - In The Beginning by David Hadley

This gem of a read almost passed me by. As a Civ player the concept appealed to me. It takes the idea of a god game to a new level with the conceit that universes can be bought and created to your own specification. When Albert, the lead character, is made redundant he is instructed by his wife to get a hobby, and acquires one to fill his time.

The story follows two intertwining threads. The first is Albert's experience of creating a world and observing it develop. It's written in a lighthearted  style with a lot of gentle humour. I read a lot of grim and epic books, and it's pleasant to read something of a different mould. That's not to say that it lacks depth. The easy going style belies a lot of subtlety in the writing. This is most evident in how Albert has to deal with creation.

It deals with the responsibilities of a creator and the behaviour of the created. It examines the role of religion in the development of a people. It does focus on the negatives of religion more than the positive, so if this sort of thing offensive, you should probably avoid this book. Personally I thought it a witty and fun handling of the problems he faces. It's quite an interesting process watching how much he should intervene with his creation, or to let them develop without interference.

In parallel with the ever encompassing nature of his hobby are the relationships in his real life. In this the story is more mundane, but that works as a contrast to the other thread. Most obvious is his marriage. His wife is now competing with his universe for his attention. His friend's wife wants to have an affair with him. And the universe encroaches on his real life.

I find humour in book's a tricky aspect to get right. It can often be hit or miss, but it worked for me throughout. It's an accessible read, well written, with good pacing. If you fancy something a little different then it's well worth a read. 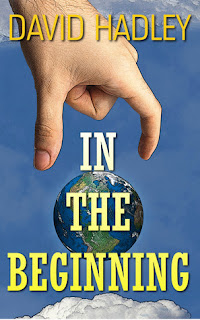 It’s a God’s life.
Albert Meadows, recently made redundant and tired of his disappointing life, is looking to make a new start and is desperate to find something worthwhile to fill his time.
So, what could be better than creating a brand new universe of his own, in his garden shed?
But, when he introduces intelligent life to his new universe, things don’t turn out as he planned, especially when the tribes on his planet each create their opposing gods in his image.
Now Albert must rescue the people on his creation from themselves and the warring religions they’ve created.
All before his people destroy each other in a war to end all wars over which version of Albert they believe in.

Click here to buy In The Beginning from Amazon