This week's Five to Five Thousand Challenge comes from  Neal Asher, one of the UK's leading science fiction authors. See what he thinks the future will hold for us below:

Computers will of course get faster and memory storage smaller, but you don’t have to be an SF writer to know that. Self-drive cars will become more prevalent, but what will slow that innovation is not the technology capable of doing this, but its durability and reliability as regards the legal ramifications. A hardware or software failure is not such a problem on your desk as it would be while driving through a crowded city or doing 70 down a motorway. More people will be recording the tedium of their lives to the social media via wearable cams and drones – I so look forward to that. And commercial space flight will take more baby steps. In all I see nothing ground-breaking, just the steady advance of technological change, and more toys for Joe Normal.

Wheelchairs will be museum items. It will now be possible to reconnect spinal nerves either by re-growing them or with hardware implants. Prosthetics will be as good as if not better than the lost limb or eye. The possibility will be there for lens replacements to have computer displays, telescopic vision, night vision and other visual enhancements. Prosthetic limbs will have all feedback senses – touch, temperature etc. The impact of meta-materials will be evident in thousands of different ways: power storage will have advanced considerably perhaps giving home owners energy independence, energy generation will be implicit in every technology – anywhere there is movement, light or temperature changes. Self-cleaning paints, frictionless screens and windows, knives that stay sharp … thousands of small things that will in total change the way people live. Every home will have a 3D printer and bespoke items will be common either from them or from small 3D printing factories.
By now I expect the commercial development of near space, maybe a privately owned space station and some zero-gravity manufacturing. Perhaps something called the Musk foundation will still be working towards establishing a base on Mars. Quite possibly we’ll have the start of a Moon base, though maybe not commercial.

The first fusion reactor will come online – a costly white elephant that holds great promise for the future, always the future. Meanwhile the numerous other forms of energy generation and storage will be supplanting the initial need. However, demand will keep on growing.

Life spans will be on average 20 years longer. Most cancers that killed 50 years ago will be either curable or manageable, but this will have revealed a whole host of other maladies. Just as curing tuberculosis and other diseases a 100 years ago revealed cancer as a prime killer. Inroads will have been made into dementia, senility … both biologically and by implants. This same implant technology will be impacting in the computer world, with people using the first forms/stages of a mental modem (or aug!).

Artificial intelligence will be much in use for controlling many aspects of our lives, and still a debate will rage about what exactly it is. It will impinge on the professional world with the first AI lawyers being onine by the end of this 50 years. Robots will be common both across all manufacturing, in hospitals, in the military, but still no more than toys to the general public. Our entire socio-political system will be undergoing a radical change. Old definitions of right and left will be sliding into irrelevance, while whether Earth’s regime becomes something horribly totalitarian is … unknown.
The next 500 years

Hotels and factories will crowd Earth orbit. Colonies will be established both on the Moon and Mars and on the Jovian moons. Fusion will be a workable reality, while massive solar arrays also capture energy from the sun and transmit it to Earth and elsewhere. Probes sent from Earth will be reaching the near stars, while conversations have been started with extra-terrestrial intelligences. The human lifespan will be potentially infinite – the human body being repairable in every way down to the genetic level. However accident and mischance will remain. Prosthetics will be available for every organ. Transference of the human mind into some other substrate will be a reality – you can have your Golem body, or just lose yourself forever in a virtual reality. Humanoid robots will be common and indistinguishable from base-format humans, and still the debate will rage about what exactly AI is. Somebody will be experimenting with an Alcubierre Drive or similar.

The human race will be unrecognisable to us now. Old debates about what artificial intelligence might be will have changed. The question now will be about what it is to be human. To separate a ‘human’ from its technology will be impossible. There are ‘humans’ now who are thousands of years old. The Solar System will be fully colonized, busy with ships, while space elevators transit from the surface of Earth, and Mars, to near orbit. The terraforming of Mars will have reached an intermediate stage, but no further action taken since it is easier to adjust humans to live in any environment, rather than change the environment itself. Humans will swim in the subterranean sea of Europa and fly in the upper gas clouds of Jupiter. Missions to the near stars will have arrived and data on alien life will be arriving all the time, some incorporated into virtual realities, some actually created in massive biomes scattered throughout the Solar System. Someone will be considering how to link up the giant solar capture plants into something more permanent, and there will be talk of an old idea by a scientist called Dyson. Someone else, working in data archaeology, will have found this, and be laughing fit to burst.

Neal Asher lives sometimes in England, sometimes in Crete and often at a keyboard. Having over twenty books published he has been accused of overproduction (despite spending far too much time ranting on the internet, walking and kayaking, and drinking too much wine) but doesn’t intend to slow down just yet. 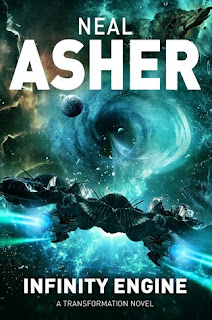 On the cusp of a black hole, the future of the Polity hangs in the balance. Several forces are now pursuing the rogue AI Penny Royal, and the Brockle is the most dangerous of all. This criminal swarm-robot AI has escaped its confinement and is upgrading itself, becoming ever more powerful in anticipation of a deadly showdown. Events escalate aboard Factory Station Room 101, the war factory that birthed Penny Royal. Here, humans, alien prador, and an assassin drone struggle to survive amidst insane AIs and technology gone wild. The situation is further complicated by the unexpected arrival of the Weaver. The Weaver is the last of the Atheter, resurrected from a race that suicided two million years ago. But why would Penny Royal want an Atheter here? And what could it contribute to the dark AI's plans? And beyond the war factory, a black hole conceals a tantalising secret - one that could destroy the entire Polity. Infinity Engine is the third and final novel in the Transformation series, by bestselling science fiction author Neal Asher, following Dark Intelligence and War Factory.

Posted by Michael Brookes at 14:14