I'm a huge Clive Barker fan, so much so that he's one of my favourite contemporary horror authors. That's down to two factors: imagination and writing style. In all of his books there is a flash of imagination, of bringing a new angle to an established genre. His style of writing is fantastic, and does often make me despair that I'll never be able to match his talent for prose.

Cabal is almost a more traditional horror story compared to his other novels, it lacks the grand scale of Weaveworld for example. Naturally there are some new angles to it, but they're not as impactful as some of his other creations. The concept of 'monster' is the heart of the book, whether that be human, or otherwise. And that tone is carried well, you see brutality in many different guises here. This works mainly through the existence of strong and well written characters.

My main complaint is that while the characters are well realised, and the setting appropriate, it only touches on the surface of this strange world. I would have loved to learn more about the nightbreed, and to be honest that of the mask as well. There were histories there that needed to be realised to bring it into the light.

As always though, no matter if the story has its flaws, his writing carries it superbly. It's not often I read a book just for the joy of the words, and while this isn't the strongest of his form (I'd probably pick the Hellbound Heart for that), it is evident as you read it. There's a real eloquence to be admired here. A decent horror read, but not his best. 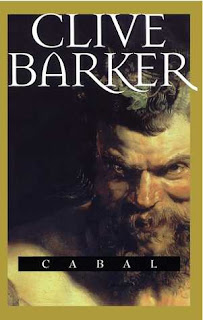 For more than two decades, Clive Barker has twisted the worlds of horrific and surrealistic fiction into a terrifying, transcendent genre all his own. With skillful prose, he enthralls even as he horrifies; with uncanny insight, he disturbs as profoundly as he reveals. Evoking revulsion and admiration, anticipation and dread, Barker's works explore the darkest contradictions of the human condition: our fear of life and our dreams of death.

Posted by Michael Brookes at 13:23