This is quite simply a stunning watch. It doesn't tell a story in the conventional sense, but it does have a narrative that runs unspoken through the film. In essence it is a collection of clips filmed across the world, it is edited to form a sequence covering aspects of life from a myriad of cultures. There's no speech it's all silent with a superb soundtrack, again reflecting the multicultural vision of the film.

The visuals are amazing, it has to be watched in high definition. The glimpses of lives all over the world make this a fascinating watch. Some of it is uplifting, at other times cruel and disturbing, but it is always interesting.

The soundtrack is also worth mentioning containing a variety of songs that match the visuals perfectly. This is an awe inspiring film, the two hours just passed by without notice.

You may have guessed that I really enjoyed watching this and I won't apologise if I sound like I'm gushing and I can't recommend this enough. 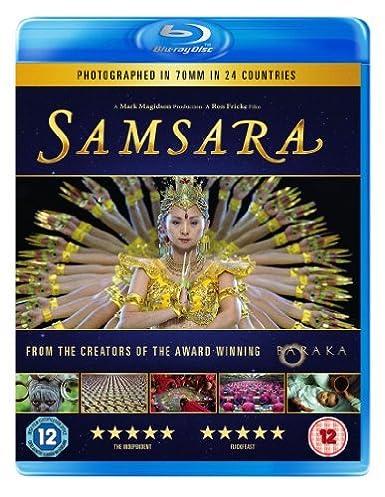 Hollywood Reporter calls it 'Soul-stirring' Independent on Sunday says 'A fascinating, clever and thought-provoking statement on the world we live in.' Flickfeast gives it 5 stars and says 'Phenomenal. A life affirming cinematic experience. A spiritual awakening in 70mm!' Samsara takes the form of a non-verbal, guided meditation that will transform viewers in countries around the world, as they are swept along a journey of the soul. Through powerful images prisitinely photographed in 70mm and a dynamic music score, the film illustrates the links between humanity and the rest of nature, showing how our life cycle mirrors the rhythm of the planet.

Samsara is available from Amazon (and is a wonderful watch)
Posted by Michael Brookes at 18:26