Drabbles of Art - The Commuters by Wolfgang Lettl 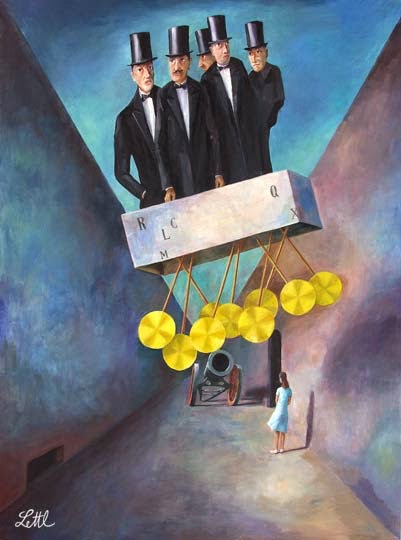 This was a completely new image for me, but as soon as I saw it while browsing the Google Art Project I had to include it in the Drabbles of Art series. It's definitely worth checking out his other paintings and I'm sure I'll return to him in the future.

If you not read the previous drabbles in the series then you can find them all here:

The Commuters by Wolfgang Lettl

“Would they really shoot us with that cannon?” the first finely dressed man asked, the fear restrained, yet clearly evident.

“I think that they would, but we’ve no choice,” said the second. “How else will the world know of what happened in this place?”

“Maybe the girl will distract them,” suggested the third with brittle hope.

“Don’t let her distract you!” the fourth shouted. “We’ll only get one shot at this.”

“We are already at full speed,” the fifth told his compatriots. “The fans won’t go any faster, they just don’t have the power.”

“Prepare to fire,” ordered the girl.
Posted by Michael Brookes at 13:23