In the latest Elite: Dangerous author interview we meet Nathanael Page, he's planning something interesting with his writer's pledge. Read what he has to say below. 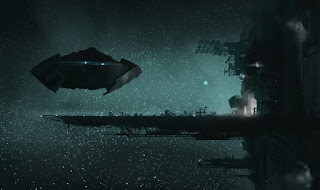 Please introduce yourself, who are you and what do you do?
I'm 38, currently single (probably a good thing if I'm going to be writing a book AND playing Elite IV), living near London. My job's a hard one to describe- I try to model the value that customers are worth to my employer, which requires the use of statistics, economics, finance, psychology and commercial acumen. My principle hobby (when I find time to do it!) is amateur dramatics- plays, musicals and pantomime.

When did you first play Elite and why did you come to love it so much?
I think it must have been around 1986- so a couple of years after the release of the game. It was on my brother's BBC. Buying it was a pretty big decision, as it was a lot more expensive than any of the other games at the time, but boy was it worth it. I'd played computer games a lot by this stage, and had a game called "Sieddab Attack", and from the screenshots I thought Elite might be similar. Apart from a vague similarity in graphics, though, the games had nothing in common- what drew me in to Elite was the sheer vastness of the game. I was completely free to go wherever I wanted, buy whatever I wanted, and choose whether or not I wanted to fight. The unscripted nature of the game, in a world where all games were linear, was revolutionary.

Have you reached Elite status in game?
Ha, yes. I made it to Elite on the original *tape* version of Elite (no military lasers! Very few ship types, no missions...), and then later on the PC versions of both Frontier Elite 2 and Frontier First Encounters. However, I had a desire in the Frontier games to also reach the highest military rank in both factions... a desire I haven't yet fulfilled (although I'm now a Colonel/Viscount).

What first inspired you to start writing?
I've been interesting in writing since I was tiny- writing stories at primary school was one of my favourite "lessons". My first story of any length was about four thousand words, and I think I stole an idea from "Doctor Who" for that- it was a sci-fi story about a race of humanoid androids, who nobody knew were androids. Very cliché, but I was only ten at the time! There was just something about trying to get the images in my head on to a piece of paper, so that other people could see what I was seeing that made me want to write more.

You're not planning to write a normal novel, tell us what you have in mind.
Ah yes, my plan is to write a gamebook, not a novel! One of the other great things about the 80s (other than Elite!) was this marvellous creation. They're a combination of story and RPG- almost like Dungeons and Dragons, except that the gamesmaster is me, the author. I talk to you, the reader, through the pages of the book giving you options on what you can do at each decision point. Do you want to attack the ship that's approaching, or run away. Perhaps you'd prefer to try talking, and so forth. If you make the right decisions, it's more likely that the hero of the book ("you") will win out. Make the wrong decisions... and, well, the book will end rather earlier than you'd like! You'll need to record on a status sheet your ship, its equipment and cargo. You'll have various skills you can use in different situations, and you will actually have to fight (using dice) some of the other ships you come across. It won't have the literary finesse of a novel- so please don't expect that- but it should be FUN. At least, I hope you find it fun!

You're funding the project with a Kickstarter project. How can people get involved?
Well, the simplest answer is- please give some money towards my project! But there's more to it than that. One thing I've learned from the gamebooks I've written previously is the importance of game-testing the books before they're released. Yes... game-testing... a BOOK! For this reason, I've decided that in addition to Survivor, I'm also going to write a much shorter (about a sixth of the size) prologue adventure, which backers of the project will get to play in Q1/Q2 next year. Feedback from those backers will give me a steer on whether my gamebook mechanics are working or not, before I get too heavily involved in the main adventure. I would also LOVE to have the book illustrated, so if anyone would be interested please let me know.

Do you have any other work we can read?
Yes, I do- although please bear in mind that these two gamebooks were written some time ago. :) Horror of Craggen Rock and Forest of Dreams can be found

Forest of Dreams is the better adventure, but it's rather difficult... if you manage to complete it, please send me the solution as I lost mine years ago!

Why do you think the Elite universe is a great place to set a story?
Elite is set at a great time in human history. We're reaching out to the stars, making our place in the universe- but we haven't quite got things right, yet. In fact, we're making the same mistakes that we're making on Earth today- from things that don't work properly (the infamous Cobra Mk II), to military factions, smuggling of illegal goods, personal greed. So although none of us have any experience of being in space, we can empathise with this dirty, grubby universe and let our imaginations fill in any gaps in our experience. Add to this some of the iconic images that the series has, and you have a universe that is immediately reocgnisable to any fan of the series. If I saw "Riedquat", I'm sure you could instantly tell me what was special about that system?

Why do you think you can make a compelling Elite story?
I don't- I think I can write a pretty good gamebook. :) The story itself will be lighter than a novel, as the narrative need to be split between telling the story, and playing a game. What I'd like to do, though, is to capture the feeling of freedom that you have on the computer screen, and transpose that onto the page. To let you feel that you are in the same universe as if you were playing E:D itself. Hopefully I'll gauge the difficulty just right so you'll need *just* *one* *more* *try* to work out how to complete the book with the "best" ending. Hopefully you'll get as much satisfaction out of reading the words "Turn to section 600" as I will in writing them.

Do you have anything else you'd like to share with us?
Only to say how excited I am that Elite is coming back after two decades away- and even more excited that I might actually get to be a part of that myself! For people who have played an Elite game before, you know how terrific this is going to be. For newcomers... you are in for an asbolute treat! So let's get this thing funded- either directly, or indirectly through one of the spinoff Kickstarters. Your support really will be appreciated, though- and I hope you enjoy Survivor when it's ready!

Thanks to Nathanael  for sharing his thoughts with us.

Posted by Michael Brookes at 22:28