Continuing on with the series of Elite: Dangerous authors we meet T. James. You can read what he has to say in the interview below.

Remember if you want to support the funding for this fantastic game then visit the Kickstarter page. Evey pledge helps! 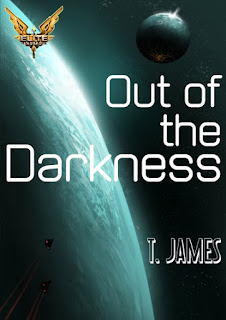 Please introduce yourself, who are you and what do you do?
I'm T. James, known to my dad and friends as TJ. I write in my spare time—a range of genres and I've even been known to dabble in poetry.

I’m married to an incredibly patient lady, and I have a loveably mad five-year-old son who also likes to tell stories—his latest being about a bird that flew into a snake’s mouth and down into the tail, where it was covered with poo. I generally aim for something a little more sophisticated.

I'm qualified as a scientist and a therapist, and I've previously worked in finance and as a community service volunteer.

When did you first start playing Elite and why did you come to love it so much?
I was lucky enough to be part of the very first wave of Elite players back in 1984, aged 13. My cockpit controls were a BBC model “B” keyboard, along with a “Quickshot” joystick suckered to a copy of the Guinness Book of World Records (I forget the year, but it was brown—not that this is in any way relevant) that sat on my lap while I played.

As Drew and John mentioned in their previous interviews, what made Elite so different and so engaging was the (back then) novelty of its huge setting and completely open-ended gameplay. Elite fired my hormonal teen imagination. For 1984 the wireframe graphics were awesome, and the fact you got to tell your own “story” as you played was fantastic. The game dynamics of improving your ranking and in-game equipment was years ahead of its time and foreshadowed nearly all of the MMOs that people play today. Every weapon upgrade, every shiny new do-hickey that I attached to my ship, felt like a major achievement. Elite was not an easy game to master, especially the docking, but this meant each improvement in my ranking and equipment acquisition felt all the sweeter. In Elite you earned the gains you made.

If I'm honest, I didn't get on as well with the later Elite Frontier games as the flight model, for me, deviated too much towards physics modelling and away from playability, but I know other players really enjoyed this aspect of the sequels. Other space-combat games that followed lacked the thrill of those early dogfights, except possibly Freespace 2, but that was missing the challenges and depth of the broader Elite game-world. As a gamer, I've been chasing the elusive mix of the original Elite ever since.

Have you reached “Elite” status in game?
Despite endless hours of play, I only attained “Deadly”. I still wake up in cold sweats, shaking in the middle of the night—that shame has indelibly scarred my psyche. I need the new Elite to succeed as playing it and reaching my true potential is my only chance of a cure.

What inspired you to start writing?
Gaming has been good to me: I’ve been playing for nearly thir—*cough* years, but a couple of years ago I decided I needed a change. I still enjoy gaming, but I hadn’t attempted anything creative since I left school. Was it a midlife crisis? Maybe, but I decided I’d give writing a go. I had no idea if I’d be any good, or if I’d enjoy it, but writing was the “something missing” from gaming—the feeling of satisfaction creating something of my own and not just consuming someone else’s creations (however well crafted).

You're gathering funding to secure the writer's pledge on the Elite: Dangerous Kickstarter - how's that going? And where can people go to support your effort?
My brother pointed out Elite: Dangerous on the Kickstarter website, and suggested that I try for the writer’s pack. It’s a scary amount of money to raise for someone who’s not tried a Kickstarter before, so I put it off for a few days and watched (“lurking” is what I believe the commenters call it). Two other writers, Drew Wagar and Commander Boz, both succeeded, so I thought, “What do I have to lose?” I am late to the party, but there’s been some early interest—at least I don’t feel like a Billy-no-mates as the Elite online community are very supportive—but there’s still a long way to go. I’ll just have to wait and see what happens.

If people are interested in the project, they can take a look here:

I hope they like what they see, and any support would be gratefully received, especially as the project is closing on Sunday, 23rd December.

Do you have a story idea if you're successful with the pledge? Can you tell us anything about it?
I have lots of ideas, probably too many at the moment: mostly snippets of scenes and possible technologies, characters and plot arcs. I’m what other writers refer to as a “pantzer”: someone who writes “by the seat of their pants”. I have to let ideas float around for a while before pouring them out on the page. I guess it’s a little like brewing beer, or fermenting and aging wine—you have to go through the foul-tasting early stages to finally create something that will tickle a reader’s palate. Some other writers outline and plan meticulously, but I’ve never found that worked for me. The process is too dry to allow my ideas to flow organically.

Do you have any other writing that we can read?
All kinds. There’s a selection of comedy, articles, short fiction and poetry on my blog: and I’ve a couple of eBooks out, both completed this year (one under a pseudonym). I’ve been pushing myself as a writer, trying to find where my limits are, but writing an Elite book would feel like coming home.

What makes the Elite universe so interesting to write a story in?
The same things that made the game so interesting to play back in 1984—it’s so open ended, and there’s whole aspects of the canon and lore that aren’t predefined like they are in other franchises such as Star Wars, Star Trek, Warhammer, or Star Gate. It means there is much more scope for a writer to use their imagination. Then there’s the more obvious stuff: you have bounty hunters, pirates, hidden factions, and lone traders struggling to succeed in a tough and dangerous universe—the Elite setting has storytelling potential built in.

Why do you think you can write a great Elite story?
The pat answer is, obviously, because I love Elite, which is true, but I think I have more to offer than that. I’ve got more than a little *another cough* life experience to draw on, as well as a broad understanding of the sciences and human nature from my degrees in therapy and Natural Sciences. Science fiction is one of those genres that has to be written with a certain level of authenticity. SF readers are very knowledgeable. You have to reach a standard of believability that doesn’t leave your readers shouting, “No way!” and ditching your book. SF as a genre can be quite dry and packed with theorems and statistics—I think I get around this by creating characters with depth that readers will hopefully connect with and by dropping them into a hard-hitting plotline.

I also tend to see things a little differently to many, and I think this comes across in my writing and makes it feel fresh for my readers.

Do you have anything else you'd like to share with us?
Erm, no? Oh, please pledge now because it goes without saying that that will increase your standing with the deity of your choice (maybe).

http://www.kickstarter.com/projects/tjameswriter/an-elite-dangerous-book-out-of-the-darkness
Posted by Michael Brookes at 17:52