The writer's pledge for the Elite: Dangerous Kickstarter has proved very popular and has already contributed significantly to the game project. Speaking personally I'm looking forward to working with all these authors.

In today's interview we speak to Sean Curtin, read what he has to say below. If you haven't joined the game Kickstarter then please visit the link below: 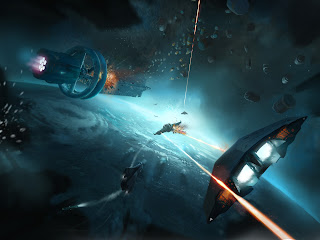 Please introduce yourself, who are you and what do you do?
Certainly.  I'm a Mechatronics Engineer by trade, who's currently undertaking a course in aircraft maintenance engineering as I wish to enter the aerospace field.  My main passions are vehicles and vehicle design and in particular aircraft and spacecraft.  Ever since I was just a youngster I've dreamed of flying through the skies and being able to go into space. I also enjoy writing Science Fiction as I believe it is imagination that is the main catalyst for innovation and enhancements to technology.(I believe it was Einstein who said 'Imagination is worth more than knowledge' ).  For me, technology is something which can enrich all our lives and will one day hopefully lead us to the stars.  It is my sincerest hope that we achieve colonies on the moon, Mars and possibly Venus within my lifetime but even if we achieve a permanent manned presence in orbit beyond the ISS, that will be amazing in itself.  I also enjoy an eclectic array of music and when I can,like bike riding and love flying.

When did you first fall in love with Elite?
Pretty much as soon as I saw the title screen, I was in love with Elite.  There was simply no other game out there that even came close.  I did have a rather hard core space simulator on my XT called 'Orbiter', and I really enjoyed that as it was a hard core space shuttle simulator, but it suffered from the fatal issue of being somewhat jagged and was far from smooth.  Elite on the other hand was not only far superior in terms of it's ability to be played seamlessly but allowed me to travel amongst star systems with a freedom I'd never encountered in a game or to be honest since.  When I see Elite clones such as 'X' or 'EVE online' for example, I just see extensions of Elite but lacking the elegance of Elite.  So I've followed Elite through it's 3 incantations and recently it's fan produced freeware incantation OOlite as to me, it still hasn't been surpassed and with the dawn of Elite IV (Elite:Dangerous) I don't believe it ever will.

And what made you enjoy it so much?
For me, being a mad keen space kid, who dreamed of going into space the moment I saw Star Wars and the famous footage of Neil Armstrong walking on the moon, Elite captivated me by giving me a universe to explore anytime I had a spare moment.  Within Elite I could be what ever I wanted to be and there was so much in the game, it kept me going for hours on end.  If you got sick of dog fighting(which for some reason I never did), you could go and concentrate on trading and becoming mega rich.  If that didn't do it for you, you could discover hidden missions within the game, if that didn't do it for you there was always the bounty hunting.  To be honest I even just loved being able to dock a spacecraft with a rotating space station.  Sometimes I would load up a completely new game, just so I could practice manual docking.  At one point I became determined to see how long I could last without the auto docking computer as to me, real piloting is doing everything manual.

Have you reached Elite status in game?
I did in original Elite.  For Frontier I confess I never got there as I wasn't all that concerned with becoming Elite, I just enjoyed jumping around from planet to planet.  For First Encounters however, I did obtain Elite status as I felt it would put me in a better position of finding the mysterious Thargoids(something I am hoping will be more of a regular everyday part of the game than an obscure race in Elite:Dangerous).

What inspired you to start writing?
There's been many sources and I'll just say a rather large answer to this question when it comes to writing, but mostly it's been my fascination with technology and dreaming up new ways in which to push the boundaries if you will, both with humanity as beings and with our love of exploration.  Ultimately, with science fiction, I find it's a way of practically putting forth scientific hypothesis if you will without the limitations often presented by physics and the nature of matter around us.  Science Fiction presents us with a medium for exploring the way in how we will go with science and technology and what we might actually do with it when we get there.  Add to that it's my kind of story writing, where you can simply have a lot of fun and create a world that's something closer to one you'd like to actually see become a reality.

You're crowd funding your writer's pack pledge, tell us how we can support your effort.
It would be really appreciated if novels yet to reach there funding goals were highlighted over those that already have. I'd like to see each and every one of those writers packs taken as I'd love to read other peoples tales of life on the Elite Frontier. Perhaps a note at the end of the updates highlighting the novels still to achieve funding and there current % as of the time of the updates.

Can you tell us about the story you plan to write?
The central character is a hard working spacecraft enthusiast who works for a ship wrecker(who was inspired by Bob Iascatti, from Elite:First Encounters). This is the story of his struggle to put together a space worthy starship and venture out amongst the stars.  I'd like to keep the main thrust of the story as a surprise for readers however I would like to add that I've been thinking of a a few nice additions to some of the spacecraft and look forward to presenting them if there approved for later use by the software designers in the game(as the novel is based around Elite:Dangerous, I'm determined to keep it firmly hinged on actual aspects within the game so as to ensure it's instantly recognizable to fans who may very well want to explore features of the novel in the actual game).

Do you have any other writing we can read?
On my campaign page at: http://www.indiegogo.com/EliteDangerousTSFT/x/1863929, there is a slice from a trilogy of books I'm currently working on.  This is unedited and shown so that people will have an idea of what they are getting in terms of writing style. I'm a firm believer in honesty and never promising anything that I can't deliver.  Having said that I have tried to give the impression of an extremely fast thinking genetically modified human being in that snippet. The characters for Elite:Dangerous will be markedly different.

Why do you think you can write a great Elite story?
Straight up, I'm not going to say I'm any better than any other writer out there as I prefer to be supportive of all other serious writers out there.  What I will say, is that I have a passion for the game, believe in it's future and have a serious love of science fiction spacecraft in all there dreamed up incantations.  For me, there is no greater deed that we could do for future generations than to build spacecraft and machines to allow us to expand beyond the earth.  Science Fiction presents a method of inspiration.  That's what got me into the line of work I am in today and as a huge Elite fan, I believe my inspiration will allow me to deliver a great Elite story which I hope will inspire others too.

What makes the Elite universe a good setting for a story?
On one hand you can easily put together a classic space opera style story filled with the typical good guys versus bad guys story lines.  On the other hand, you could also blur the line between the good and bad guys by presenting the economic issues which are prevalent in the Elite universe.  Elite is also a framework with an emphasis on quality and encourages new ideas by it's very nature, which is the ultimate writers tool.  This to me is: The galaxy is your oyster and you can do and be anything.

Do you have anything else you'd like to share with us?
If my project doesn't make it, then I still hope I will get a chance to meet all the other authors out there and promise not to shoot you down in the game.  :)   I wish every success to all the other authors and really look forward to reading this new Elite material.  (It's terrific, we now have an Elite, game book, another collection of stories in the pipeline and 3 other full on Elite novels in the pipeline just to begin with).  I'd certainly like to add another and have the chance to write a great Elite story for you all.  By backing this project you will be helping to contribute a very nice backing amount to the Elite:Dangerous game.  This is my way of giving something back to Elite, which is what were all so excited about.

Thanks to Sean for sharing his thoughts with us, please visit his project at http://www.indiegogo.com/EliteDangerousTSFT/x/1863929 and give him your support.

Posted by Michael Brookes at 12:43