This tale is a damn fine example of a horror short story, and one I'd recommend to all fans of the genre. It takes a seemingly mundane event (albeit one that comes with its own fears) of travelling home on the underground and fills it with terror. The pacing is spot on and it gets going almost immediately. The scene is set deftly and as events unfurl it builds menace, and doesn't rely on cheap tricks to get its scares.

I don't mind a bit of gore, or splatter based horror, but I much prefer horror which uses mood and suggestion to spin the terror. The author manages just that here with his story. The moods of fear and confusion are eloquently portrayed, and effectively. It's not until near the end you get a glimpse of what is going, and even then all is not fully revealed - we'll have to wait for the following novel to reveal more.

As with his previous works, I appreciated his talent for word play. With short stories it's important to keep focused and not waste words, and a lot of craft is evident in the writing of this story.

It's an interesting technique to use a short story to build interest in a forthcoming, and larger release. It can often backfire if the short story doesn't stand on its own merits. This story works well on its own, telling the story of Emily's journey home, yet still maintaining enough mystery to entice interest in the novel. It's worked for me, and I can't wait for its release! 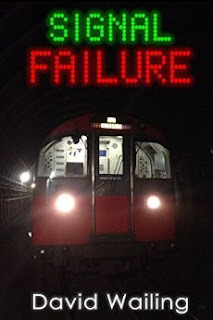 It’s four in the morning and Emily is heading home on a London Underground train. But the Night Tube is running slow tonight – delays caused by a signal failure, as usual.

The train stops again, stuck in a tunnel between Tube stations. And then the lights go off. The motors cut out. Silence from the driver.

All the doors slide open at the same time, exposing the passengers to the tunnel.

To let them get out?

Or to let something get in?

Signal Failure is a 12,000-word short story set in the London Underground. It is a standalone story and also a prelude to the forthcoming novel Under.

Posted by Michael Brookes at 10:41