I almost didn't finish this, but a friend advised sticking with it, and I'm not convinced it was worth it. In fairness the last third of the book really shines compared to what preceded it. My problem is that it took too long to really get to the meat of the world. And it's a fascinating world. There are zones that restrict certain technologies, making for a chaotic and disparate existence for its inhabitants. The reasons for this aren't really touched until the end, but even then with a frustrating lack of clarity.

There's a lot going on in the story, but it flashes by too quickly to gain any real insight. The different cultures are only glimpsed briefly, and while there is a rich tapestry depicted here, it isn't really followed through. And I think that's what disappointed me about this book - there was so much potential here, but unfortunately not realised.

The same is true of the characters. The lead character is reasonably well rounded, but those that joined him weren't fleshed out enough to give them any real depth. The ending does compensate for the journey there, but not enough for me to recommend it. 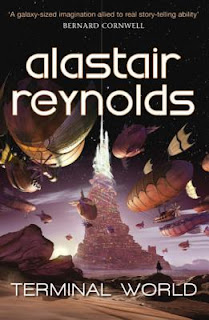 Spearpoint, the last human city, is an atmosphere-piercing spire of vast size. Clinging to its skin are the zones, a series of semi-autonomous city-states, each of which enjoys a different - and rigidly enforced - level of technology. Horsetown is pre-industrial; in Neon Heights they have television and electric trains . . .

Following an infiltration mission that went tragically wrong, Quillon has been living incognito, working as a pathologist in the district morgue. But when a near-dead angel drops onto his dissecting table, Quillon's world is wrenched apart one more time, for the angel is a winged posthuman from Spearpoint's Celestial Levels - and with the dying body comes bad news.

If Quillon is to save his life, he must leave his home and journey into the cold and hostile lands beyond Spearpoint's base, starting an exile that will take him further than he could ever imagine. But there is far more at stake than just Quillon's own survival, for the limiting technologies of the zones are determined not by governments or police, but by the very nature of reality - and reality itself is showing worrying signs of instability . . .

Posted by Michael Brookes at 21:37