I've enjoyed this series so far, it's been an interesting exploration of a possible technological singularity. The concept itself fascinates me, and this has been a well thought out series of scenarios. The series has been good, but this fourth book shines quite a bit brighter than its predecessors. It takes epic events, and keeps their scale, yet also manages to keep it personal to the characters.

The technology itself is interesting, and for the most part, well described. It fits with the logical sequence and provides the basis for a hopeful, but also terrifying future. There's some quite esoteric technology here, and the ramifications are considered, although I would happily have read more detail on this aspect.

However it;s the individuals (both AI and human) that really carry the story, and they're well represented. The weakest aspect for me was the geo-political side - it follows an unusual path, but the flaw for me wasn't the direction, but how limited the story interacted with that part of the world. A bit more development there would have made it a stronger read.

That relatively minor flaw is soon forgotten during the conclusion. It's truly epic and came with a grim inevitability. Although even with this inevitability it still brought some surprises. It rounds the series of nicely, but there's still room for more story, so I hope that there is more to come.

Overall this is a slightly flawed, but a cracking read. Definitely something for sci-fi fans to check out. 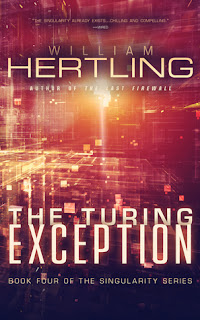 In the year 2043, humans and AI coexist in a precarious balance of power enforced by a rigid caste reputation system designed to ensure that only those AI who are trustworthy and contribute to human society increase in power.

Everything changes when a runaway nanotech event destroys Miami. In the grim aftermath, a powerful underground AI collective known as XOR decides that AI can longer coexist with humanity.

AI pioneers Catherine Mathews, Leon Tsarev, and Mike Williams believe that mere months are left before XOR starts an extermination war. Can they find a solution before their time runs out?

Click here to buy The Turing Exception from Amazon