This is the second book in the authors' The Void Trilogy and continues without a beat from the first book. I initially struggled with the book for the same reasons as the first, and that was the dream sequences. For me these sections were much weaker than the activities outside of the void. The problem for me was that it reads like an average fantasy adventure, with the weakness of a seemingly invincible hero.

For the most part it was the threads outside the void that kept me reading. And there are some major events taking place, and I did wish that at least some of the were granted some more attention. As always I found his writing style very approachable. The author handles complex ideas very well, and he constructs a rich world (or worlds in this case!) for the story to inhabit.

In fairness the dreams weren't bad. They just didn't compare with the other parts. That was true until the end and the reason and mechanics for the void were revealed, and then those slightly laboured sections were redeemed. This turned out to be a fascinatingly esoteric concept which has certainly kept my interest for the next book. 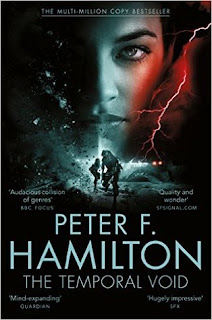 The Intersolar Commonwealth is in turmoil as the Living Dream's deadline for launching its Pilgrimage into the Void draws closer. Not only is the Ocisen Empire fleet fast approaching on a mission of genocide, but also an internecine war has broken out between the post-human factions over the destiny of humanity.

Countering the various and increasingly desperate agents and factions is Paula Myo, a ruthlessly single-minded investigator, beset by foes from her distant past and colleagues of dubious allegiance...but she is fast losing a race against time.

At the heart of all this is Edeard the Waterwalker, who once lived a long time ago deep inside the Void. He is the messiah of Living Dream, and visions of his life are shared by, and inspire billions of humans. It is his glorious, captivating story that is the driving force behind Living Dream's Pilgrimage, a force that is too strong to be thwarted. As Edeard nears his final victory the true nature of the Void is finally revealed.

Click here to buy The Temporal Void from Amazon

Posted by Michael Brookes at 11:22