Book Review - Legion of the Damned by Rob Sanders

I've been a fan of the 40K universe for many years now. I love how bleak it is, with failing technology, an Emperor that has to be sacrificed to daily to keep him alive, and with alien and darker threats on every side. If you're not already a fan of the universe then this probably isn't the best introduction, but if you are then dive straight in.

Back in my youth (when I actually played the game) the Legion of the Damned were probably my favourite chapter, simply because of the mystery of them. I was hoping that more about their history and what they were would be revealed in this book, but despite the name they only play a small (if significant) role in the events of the story.

That disappointment aside this book does a good job of reflecting the grim future of the universe. The stilted style evokes the ritualistic lifestyle of the Imperium, especially the space marines. In some ways this was a trip back to my tabletop gaming days, but I found the universe just as compelling, with some brutal military science fiction.

There isn't a great deal of depth to the characters (except for some nuances for the lead), but things move at such a pace that it doesn't matter too much. It does suffer from the faceless enemies syndrome a little, but that is to be expected from a battle on the scale of this. There were some exceptions, especially for the World Eaters - brutal champions of my favorite Chaos Gods.

Overall this is a tense and action packed story, that fits the universe well. And I now have the taste of reading more in this fiction again :-) 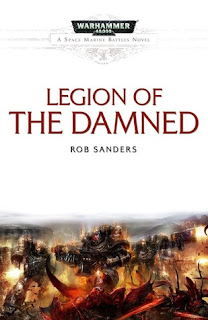 Following the trajectory of a blood-red comet, the berserk World Eaters blaze a path of destruction across the galaxy in its wake. The small cemetery world of Certus Minor appeals to the Space Marines of the Excoriators Chapter for protection, but the force dispatched to deal with this grim threat is far too small and their losses against the renegades are high. Just as all seems lost, salvation is borne out of legend itself as sinister spectral warriors descend upon this planet of the dead, and the enemies of the Imperium come face to face with those who have already travelled beyond the realm of the living...

Click here to buy Legion of the Damned by Rob Sanders