Guest Post - Lament of the Fallen by Andy Peloquin

To celebrate the release of 'Lament of the Fallen', the second book in his 'The Last Bucelarii' series, Andy Peloquin has written a guest post for this blog:

A Peek Behind the Scenes…

For me, writing likeable heroes has always been easy. Mix a bit of snark with plenty of nobility and courage, throw in a few well-chosen character flaws, and voila! A hero worth reading. Epic and glorious deeds all around.

Villains have also been fairly easy. Give them plenty of nasty traits, add a pinch of goodness to make them relatable, have them do terrible things, and you're set.

(Obviously, this is a dramatic over-simplification of things, but you get it!)

Anti-heroes, however, are a challenge.

An anti-hero is neither good nor bad, hero nor villain. There's enough about them (motivation, personality, actions) that you like him/her, but plenty about them that prevent them from being true heroes. The "shades of moral grey" are a wonderful element to explore, something I do in my The Last Bucelarii series.

The series follows a half-demon assassin. You have the villainous "assassin", but the fact that he has voices in his head that "force" him to kill gives you a bit of empathy for him. Add in his desire to protect the "outcasts" like himself--the beggars, lepers, and orphans--and you've got just enough heroism to make you root for him.

The first book was all about introducing the character and the world in which he lives. (No spoilers, I promise!) He could be the hard-ass, ruthless, vicious killer at the beginning, so long as he became a bit more human and relatable by the end of the book. Once you read about his suffering, loss, and sorrow, you'll root for him and want him to defeat the villains.

But the challenge with writing the second book in the series was to continue his character growth without making him a "hero". A good anti-hero stays an anti-hero, though his actions, motivations, and intentions do become a bit more heroic as the story progresses. But he never becomes properly heroic, but stays in the "world between good and evil".

At the beginning of Book 2, I had to find a way to continue with the personal growth and development without making the character too good, noble, or soft. After all, he's a half-demon assassin with a demonic voice in his head and a bloodthirsty cursed dagger. He can't really become a hero, not with all that baggage. So I was tasked with writing a story that brought him on a journey of self-growth, but one that didn't water down the ruthless killer he was.

It's a tough balance to walk: harsh and cruel yet empathetic, vicious yet caring, and ruthless with a streak of heroism. I'd like to hope I pulled it off…I invite you to judge for yourself! 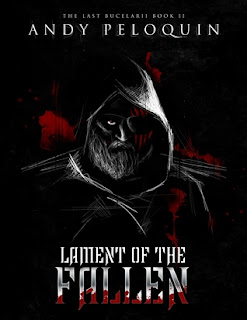 The Hunter of Voramis is no more.

Alone with the bloodthirsty voices in his head, fleeing the pain of loss, he has one objective: travel north to find Her, the mystery woman who plagues his dreams and haunts his memories.
When he stumbles upon a bandit attack, something within urges him to help. His actions set him at odds with the warrior priests commanded to hunt down the Bucelarii.
Left for dead, the Hunter must travel to Malandria to recover his stolen birthright. There, he is inexorably drawn into direct conflict with the Order of Midas, the faceless, nameless group of magicians that holds the city in a grip of terror. All while struggling to silence the ever-louder voice in his mind that drives him to kill.
From feared assassin to wretched outcast, the Hunter's journey leads him to truths about his forgotten past and the Abiarazi he has pledged to hunt. His discoveries will shed light on who he really is…what he really is.

Fans of Joe Abercrombie, Brandon Sanderson, and Brent Weeks will love the Hunter…

Click here to buy Lament of the Fallen from Amazon
Posted by Michael Brookes at 13:24