In today's guest author interview we meet R M F Brown, read what he has to say below: 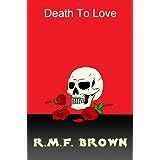 Please introduce yourself, who are you and what do you do?
Hello, my name is R.M.F.Brown, and I am a man of letters. Previously, I was a student of history and philosophy, but I’ve abandoned the stability of these professions in order to pursue a creative career. Before that, I was a DIY man, and generally somebody stuck in a succession of dead end jobs.

What first inspired you to start writing?
I’ve always been a creative person, and being a writer is unique in a sense. By creating worlds and stories, heroes and villains, themes and ideas, you essentially become god like. This level of creativity can be quite intoxicating. Also, as I mentioned above, it’s a lot better than flipping burgers and being stuck in a call centre.  It may not pay well, but there is a sense of a higher purpose to the writer.

What attracted you to the horror genre?
Primarily, I’m a crime writer, but I also dabble in the black arts with a few horror novels from time to time. I consider horror to be one of the best genres in the canon of literature. It’s breadth of imagination, its attack on the senses, and the skill needed to pull off the suspense, places it above its rivals in my view.  Plus, I’ve always liked zombies, watching hammer horror films at three in the morning, and having the brown stuff scared out of me!

If you could work with any author, who would it be?
James Joyce. I would try and persuade him not to bamboozle the hell out of his readers!

What do you enjoy most about writing?
I love the fact that you can sit down and bash the keyboard for a couple of hours…and end up with something that makes no sense whatsoever. And because writing falls under creative arts, any critics can be dismissed on a whim as ‘not getting my vision.’ Only art provides that shield.

And the least?
Editing your work. The euphoria of finishing a novel quickly evaporates when you’re confronted by the long, laborious process of checking a 50,000 word novel for misplaced commas.

What advice would you give new and aspiring authors?
Work work work. Writing is ninety per cent graft, ten per cent craft. Nobody comes looking for your work, and books don’t write themselves. As somebody once said to Kevin Costner: “if you build it they will come…”

What are you working on at the moment?
A horror novel about mad monks, ghouls, and a taste for human flesh.  A perfect antidote to the artificialness of modern Christmas.

Tell us about your latest work and how we can find out more.
My latest work is a crime novel ‘Death to love.’ It’s set in 1960s West Germany. Yes, it’s another world weary detective who drinks/is divorced/ hates himself etc etc but unlike the majority of detectives who seem to be moody (because they had trouble potty training) the main character of this novel has good reason to be moody. He served in the German army during World War Two, and may or may not have done bad things. The book deals with themes in German society at the time: war guilt, rebuilding the country, foreign occupation etc

It’s available to buy from the Amazon kindle store.

Thanks to R M F for sharing his thoughts with us, on Wednesday we weclome Stephen Whaley to the hot seat.