Don Martinez's blog tour for his newly released book 'Infernal Eighteen' started on The Four Horseman Series blog (http://4horsemenseriesbr.blogspot.co.uk/2013/02/lets-welcome-author-don-martin.html) and today he joins us for the second day of the tour. 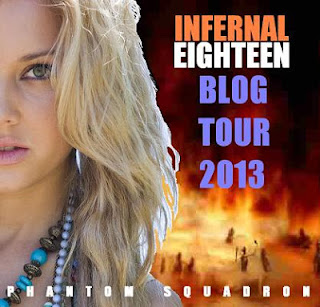 Welcome to the second day of your blog tour! Please introduce yourself and tell us a bit about yourself.
Before I begin, I want to sincerely thank you, Michael, for hosting us today. My name is Don A. Martinez. In my regular day-to-day life I teach developmental writing as a professor at a small college in east Texas. I hold degrees in writing and in English, with a focus on mythology and folklore, a specialty which definitely helps a fantasy writer. I live here in Texas with my wife and daughter, who readers will see my books dedicated to regularly.

The tour is supporting your new book in the Phantom Squadron series, tell us about the series.
The Phantom Squadron series is a fantasy story which was inspired by the 9/11 attacks. Part of my thinking regarding these attacks was what could lessen their impact for me personally, and as a result my mind started playing with the thought of demons in the world being countered by the U.S. government having a fantasy adventuring party in tow. It's kind of like Tom Clancy, Gary Gygax, and Hayao Miyazaki getting together on a single story. When I got into the most recent books, starting with Insurgent's Journal, my increasingly darkening eye took over and some of the writing was colored by my own feelings about where the nation's gone, particularly the politics.

Before we find out more about your new book, let's get to know you a bit better :-) What first inspired you to start writing?
It's in my blood. My grandmother was a poet and writer, though she didn't have much publishing success. My father was a storyteller, but he didn't really have the skills to put his stories down in writing; his was more of an oral tradition. When I started writing, I was living with my grandmother and mother who gave me a lot of encouragement and fed my creative beast, so to speak. It also doesn't hurt that I've always had a bit of an overactive imagination.

If you could work with any author, who would it be and why?
There's a lot I wouldn't mind working with, but I have a shortlist, and at the top of that list would be Alan Moore, who's one of my influences. I don't know of anyone who can turn on the darkness and humor with as much class and skill as he does, and his work is something I aspire to emulate with my own.

Do you have a favourite character from your series?
Some of the characters remind me of people I know. Two of them share bits of my personality ... it might surprise people to know that the two characters are the Sharpe women, Ariel and Alanna. Some of them are simply characters that don't show up often enough, for my taste. Above all, if you want my favorite one to write, that would have to be Kitty Lazarus. I try to make her feminine but at the same time she's a hard-cussing, hard-fighting combat monster, and that has to show in her actions. She also gets the best wisecracks mainly because it's in her character. So she's my favorite to write.

What advice would you give new and aspiring authors?
Keep writing, and don't worry about numerical bull like page counts and word counts. A very wise teacher of mine wrote a book that says writing is flow. I can't think of a more certain truth in a writer's existence. Writing will flow when the time is right: you can't force it. At the same time, you also can't limit yourself. Let your freak flag fly as often as you need to in your writing: the more you put down on paper, the better you'll feel, and probably the better you'll have written.

Tell us about your new release and how we can find out more.
Infernal Eighteen picks up about six months after The Insurgent's Journal leaves off. Alanna Sharpe has to rejoin the insurgency against the New Empire of America she was reluctantly placed at the head of, and continue trying to find her family. Ultimately, she finds her father, but he's a soulless shell, and she has to return his soul to his body. Unfortunately, that soul's being held hostage in Hell, so in order to get him back Alanna has to retrace the path of Dante Alighieri through the Inferno, with a less-than-trustworthy damned soul as her guide ... fans of Dinetah Dragon will be in for a surprise as to the guide's identity!

There's several places to get more information on the New Empire and the insurgents. You can visit the official Phantom Squadron site (http://phantomsquadronofficial.weebly.com). You can ask questions at the blog for the Hidden-In-Plain-Sight Ranch (http://hiddeninplainsightranch.tumblr.com). You can follow me on Facebook and on Twitter (@Desert_Coyote13).

Infernal Eighteen will be released on February 15th in paperback, Kindle, Nook, and Smashwords formats. 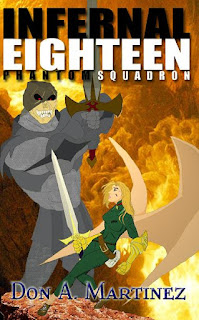 Posted by Michael Brookes at 15:57