I found this book a bit of a mix. I liked the basic idea and it's very well told, however the early part of the story feels more like a litany of suffering than a plot. It's well described and does have a purpose, but is heavy going - especially if you're squeamish about medic procedures. It's well described and layered effectively, but I did wonder if there was a point.

Thankfully  there is and the stories comes together for the middle part. It introduces some mystery and that provides a lot more interest. Alongside the personal torture is a decently constructed thriller, although it does fall foul of a few tropes. This elements develops at a reasonable pace and does offset the torture elements.

The weakest part for me was the ending. It didn't really do much with the mystery that built so well in the middle section, although I expect that will be revealed in the later books. The tone of the ending indicated that this was really just an origin story, which is fine, but also gave the impression that the story only existed for that purpose.

That being said, it is well written and a quick read. It  touches on some genuine insights and did leave me interested enough to buy the next book. 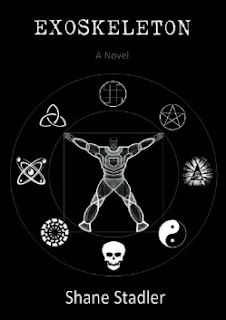 A convict is given a choice at his sentencing: Serve a 25-year prison term, or spend one year in an experimental corrections program. As his only hope for redemption, he opts for the latter, and finds himself in a horrific situation that transforms him into something the world has never seen. EXOSKELETON is a dark, dark ride along the border between science fiction and horror.