I discovered Wayne Barlow through his artwork, in particular the imagery of Hell he created for this book. When I discovered that he wrote a book involving those characters I immediately bought it. The book draws a great deal of inspiration from Paradise Lost and the Divine Comedy. As anyone familiar with me knows that I'm a huge fan of Paradise Lost. I also enjoy people's different interpretations of it and this is a good one.

The author's realisation of Hell is outstanding with a great attention to detail. As can be expected it is a brutal domain, but it's a cold and unfeeling Hell. Hell existed with its own denizens before the Fall and the arrival of the cast out angels and condemned human souls transforms the landscape.

Beyond the well crafted setting there's the core story of the search for redemption with one of the Demon Lords wanting to return to Heaven. It's a grand quest and one that involves the first true war in Hell. The campaign follows a familiar path, however there are some twists and turns and imaginative use of the demons and souls abilities to keep things interesting.

The tale is told from a few different perspectives, each carrying a different theme. Lilith's is a fascinating story, mainly because it differs from the others considerably. She's also the only female character of any significance in the story.

While I enjoyed the story a lot it does have some issues. The first is that the author doesn't wield words quite as well as paintbrush and the writing has a ponderous feel to it. It captures the scale of the events, but provides a bit of barrier for the first few chapters.

Considering the subject matter I expected more on the philosophical side and in particular more about the war in Heaven. It's mentioned as background and Lucifer is portrayed as the bad guy - he takes no part in the story directly though. He has mysteriously disappeared and I hope there is a future book revealing more about that.

Overall I liked it a lot. There are some flaws with the book, but it's a fine and imaginative read. 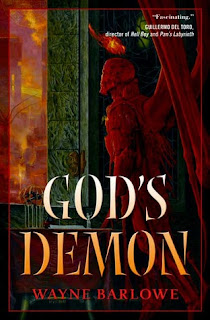 Lucifer's War, which damned legions of angels to Hell, is an ancient and bitter memory shrouded in the smoke and ash of the Inferno. The Fallen, those banished demons who escaped the full wrath of Heaven, have established a limitless and oppressive kingdom within the fiery confines of Hell. Lucifer has not been seen since the Fall and the mantle of rulership has been passed to the horrific Prince Beelzebub, the Lord of the Flies.

The Demons Major, Heaven's former warriors, have become the ruling class. They are the equivalent to landed lords, each owing allegiance to the de facto ruler of Hell. They reign over their fiefdoms, tormenting the damned souls and adding to their wealth.

One Demon Major, however, who has not forgotten his former life in Heaven. The powerful Lord Sargatanas is restless. For millennia Sargatanas has ruled dutifully but unenthusiastically, building his city, Adamantinarx, into the model of an Infernal metropolis. But he has never forgotten what he lost in the Fall--proximity to God. He is sickened by what he has become.

Now, with a small event--a confrontation with one of the damned souls--he makes a decision that will reverberate through every being in Hell. Sargatanas decides to attempt the impossible, to rebel, to endeavor to go Home and bring with him anyone who chooses to follow . . . be they demon or soul. He will stake everything on this chance for redemption.


Click here to buy God's Demon from Amazon (and it's a riveting read)
Posted by Michael Brookes at 15:28