I enjoyed the first book in The Long Earth trilogy, it had interesting ideas and some interesting characters. This second book provides more of the same but somehow doesn't quite hit the same mark as the first.

The story continues some time after the close of the first book with humanity continuing its expansion across the long Earth. This is causing problems with the government back on earth as well as the indiginous populations with the other Earths. As with the first book it explores some interesting effects that the parrallel worlds have. The flaw for me is that they're not fully realised. The navy expedition is a good example for this disconnect.

And for me that was the problem with the book generally, it doesn't follow up with all the good ideas and brings very little depth to them. I'm hoping that these will be better resolved in the next book. And I will be reading the next book because while I don't rate this as highly as the first it did do enough to keep me reading. WHile there were flaws in the details the quality of writing was strong and I did enjoy the book.

I am hoping that the final book in the trilogy provides a return to the first book's form though! 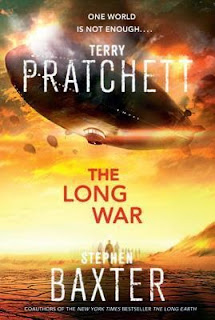 A generation after the events of The Long Earth, mankind has spread across the new worlds opened up by Stepping. Where Joshua and Lobsang once pioneered, now fleets of airships link the stepwise Americas with trade and culture. Mankind is shaping the Long Earth - but in turn the Long Earth is shaping mankind... A new 'America', called Valhalla, is emerging more than a million steps from Datum Earth, with core American values restated in the plentiful environment of the Long Earth - and Valhalla is growing restless under the control of the Datum government...

Meanwhile the Long Earth is suffused by the song of the trolls, graceful hive-mind humanoids. But the trolls are beginning to react to humanity's thoughtless exploitation... Joshua, now a married man, is summoned by Lobsang to deal with a gathering multiple crisis that threatens to plunge the Long Earth into a war unlike any mankind has waged before.

Posted by Michael Brookes at 12:00