This is the third book in the author's 'Contact' series and like the previous two books it didn't disappoint. It's a blend of military high tech action, strategy and scientific exploration. Of the three facets the action dominates the story and while the tactics involved are similar for the engagements they are written with an immediate and engaging style. The action is fast paced and illustrates some interesting possibilities for future combat.

This also sets the tone for the book as a whole. It's comprised of mainly short and punchy chapters that seem a little frantic at first but I soon adapted and enjoyed the furious pace. The strategy is the least active element of the story and mostly provides a framework for the rest of the story. It is more developed than the previous books so I'm expecting this to expand further in the next - which I've already bought!

The action and strategy is well written but for me the biggest strength of the story is the exploration of alien technology and there's some fascinating ideas here. I'd love the book to have more of a focus on this aspect, but it provides enough to keep me interested.

So if you're a fan of military sci-fi, but with an undertone of scientific thought then this is a book, and indeed a series well worth checking out. 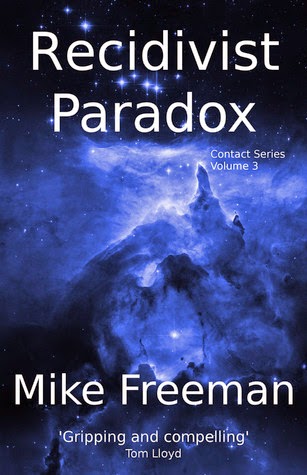 Two enemies are one...

Abbott turns the human civilizations against each other as more ships are consumed by the unstoppable Diss. The dwindling Alliance survivors struggle to learn more of the mysterious Plash and its transcendental technologies – desperate to find a way to combat the invulnerable Diss before the unrelenting Talmas hunts them down.

Ultimately, someone must confront Abbott face to face.

RECIDIVIST PARADOX is a hard hitting space opera/ scifi adventure. It is the THIRD book in the Contact series.

Click here to buy Recidivist Paradox from Amazon (and it's a fine sci-fi adventure)
Posted by Michael Brookes at 13:29