This was a thought provoking read. Without the supernatural aspect this would have portrayed an excellent descent in madness, and at times I thought that was what the story was about, and perhaps it might have been stronger for it. The divine beings felt more like plot devices compared to the visceral experiences of the human characters. I suspect this is too keep them mysterious, but it makes them the weaker part of the story.

And it's with them that that the book really shines. You feel for Billy and his loss. While the events follow a familiar pattern, the emotion is well realised and draws you into the wreckage of his life. This same feeling is drawn with the other characters. The entry of the first of the divine beings changes the course of his life and sets things up for the rest of the plot. Here the book is weaker, but is more than compensated by the rest of the story.

Things do get confusing as the story progresses, although the clues are there as to what is going on. There's a diverse range of characters, and enough mystery to keep you pondering. I liked the author's writing style, and the pacing pulls you through the story well. It fell a little flat at the end with a grand appearance from another divine character who ties things up for Billy, without really explaining anything about the backdrop the story was drawn across.

So, it has some disappointments, but overall it's a tight, and well written story with some nice ideas. 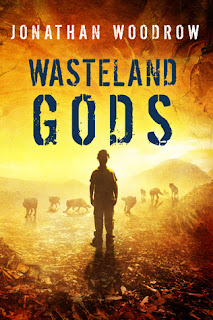 After the brutal murder of his son is broadcast over the internet, Billy Kingston becomes consumed with alcoholism and thoughts of revenge.

But his outlook changes when a divine being named Dr. Verity offers Billy the chance to not only find the man responsible for his pain but to remove him from this world before he can commit the murder.

When the deal with Verity takes a wrong turn, Billy moves to the small, remote town of Benton Lake and the chance of a new life. Only Dr. Verity isn’t through with him yet. Not by a long shot...