I loved this book. It's a great take on first contact. It's a topic that fascinates me, and one that is often tackled by science fiction authors, and this book is a fascinating read. It touches on details that I hadn't thought of in this situation.

The book is formed from two parts. The first is the initial contact with the aliens and the expedition to initiate first contact. This was my favourite part of the book. The aliens are well realised, with just enough commonality to allow the reader to relate to them, but with sufficient differences to make them feel alien. To be honest, I would have been happy to read more about this process.

Naturally the aliens have a secret, one that threatens any possible deal with humanity. This leads into the second part of the book with the political fallout and dealings within the human empire. While this didn't interest me as much as discovering the aliens, it did raise some interesting points and does set it up nicely for the next book.

It does have it's flaws though. The core story is fine, but some of the components don't match up. The characterisation is limited in many cases with most just filling their roles for the plot. Don't let that put you off though, this is a gem of a read. 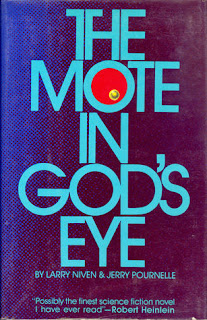 In 3016, the 2nd Empire of Man spans hundreds of star systems, thanks to faster-than-light Alderson Drive. Intelligent beings are finally found from the Mote, an isolated star in a thick dust cloud. The bottled-up ancient civilization, at least one million years old, are welcoming, kind, yet evasive, with a dark problem they have not solved in over a million years.

Click here to buy The Mote in God's Eye from Amazon

Posted by Michael Brookes at 21:12