This is the second book in the Horus Heresy series, and I'm still eager to continue the series! I've stated before that I'm a big fan of the 40K universe, and this series reveals one of the core foundations for that setting. As with the first book we learn more about the Warmaster, and follow his descent into heresy.

The story delves a bit deeper into Horus' personality, and in particular the seeds for his fall. The mechanisms weren't unexpected, but it did have some surprises. It certainly sets the scene for events to come. It's also well reflected in the surrounding characters, in particular the members of the Mournival introduced in the first book. The new characters from other chapters play a significant part and also help identify the nature of the different Astartes chapters (well legions at that point).

The bleak nature of the universe is one of its best features, it's all very much shades of grey, even when there's a supposed purity of purpose. This is reflected in the writing which has a formal, and almost sombre feel. Having different authors in a series can be a mixed bag, but the style is consistent with the previous book. The style of writing suits the setting, but there are nuances here as well. For superhuman characters, there's some appreciated subtlety in the writing and characterisation.

The books downside is shared by many others in the world. As they're aimed at players of the game there's a lot of assumed knowledge, although for fans it does add a lot of richness to the background. Overall it's a solid action story, with some thoughtful moments. Definitely a good read for fans. 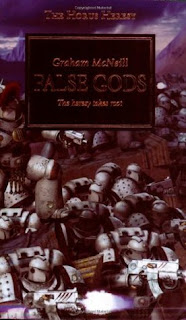 Far from Terra, the XVIth Legion continue in the Great Crusade as the 'Sons of Horus'. Putting the debacle with the interex behind him, the Warmaster has become more withdrawn as he struggles to deal with the jealousy of his brother primarchs, and increasingly relies on the council of his advisors as he plans each new campaign. Noble captain Garviel Loken harbours misgivings about the clandestine ways adopted by many of his brethren, but when the Legion is sent to reconquer the moon of Davin, it is clear that Horus has a personal stake in the matter which may have clouded his judgement. With dark forces rising against them, have the pimarch and his warriors been drawn into a trap?

Posted by Michael Brookes at 13:32