Book Review - Is It Her? by Jonathan Hill and Kath Middleton

This book has a very interesting premise. They have each written a novella length story inspired by the painting 'Is it her' by Rod Buckingham. Both of these authors share the ability to entice me beyond the borders of my usual reading domains, and I'm always eager to read their latest releases. With this interesting concept it allowed me to compare their styles while they handle similar subject matter.

The book opens with Jonathan Hill's story which is an intimate tale of a small group having a last night together before two of them leave to fight in the war. The story plays the author's strength. He has a particular talent for emotion and this is well represented here. As the evening unfolds you discover more about the loves and fears, and also the secrets that bind, and separate them.

As with his previous books, the story is very well written, he has a real talent for word play which always make his stories a joy to read. The pacing is solid and for the most part fits the length of the story. There is an odd miss-beat near the end with a large jump in the timeline, although there is a purpose for this, it adds a discordant note. The final scene recovers this, and ends the tale in style.

Kath Middleton's story follows a similar them, although the details are very different. It's also told in a very different style. It has the feel of a memoir, or two memoirs as it is told from two perspectives. It's also set against the background of the war, and that also plays a more overt role in the story. The plot follows a slightly more expected line than the earlier story, but also contains a wider scope.

And right there we have the more obvious contrast. Jonathan Hill's story is much closer, with much more personal revelations. Kath Middleton paints with broader strokes, but on a larger canvas. I also enjoyed how they both brought their stories back into the painting. To conclude, the book is an excellent read by two master story tellers. 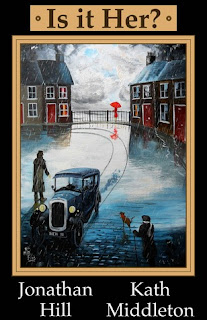 Inspired by Rod Buckingham's enigmatic 'Is it Her?', Jonathan Hill and Kath Middleton present two novellas, their own takes on this painting.

Is it Her? - Jonathan Hill

The celebration, as Violet so determinedly put it, is falling away before their eyes. Her attempt at buoying up everyone has resulted only in her being drawn farther into a web so complex that no one thread can ever lead to the entire truth. Violet. Cliff. Tom. Jack. Each holds and withholds. Each knows and doesn't know. Each chooses what and what not to say. The picture can never be complete for any of them. Never.

Is it Her? - Kath Middleton

I'm quite ashamed to remember how rarely we spoke about the politics of the day. The dark cloud that loomed over all our futures. We were simply looking the other way.

Frank and Vera fall in love the summer before the war. They vow that when it's all over they'll marry. But war has a way of tearing lives apart.


Click here to buy Is It Her? from Amazon

Posted by Michael Brookes at 17:49