I used to be very into my Warhammer 40K with my Space Marine army, and back then the Horus Heresy was a footnote in history. I've always been a fan of the setting, and while I don't play the games anymore, I do still enjoy reading stories. This is the first book in the long running 'Horus Heresy' series, and details the events of 10,000 years before the game.

While the book is set far in history from the games' point of view, as these are the precursors to the famous space marines it didn't take long to familiarise myself with the setting. If you're new to the universe then this probably isn't the best book to start with, as there's little introduction to the mythos.

The book's setting before the more formal marine chapters known later allow a greater flexibility with the marine characters as they conduct their great crusade to stamp the Imperium's seal across the galaxy. They're still superhuman killing machines, but there are nuances to their cha=racters which help offset the bleakness of the world they inhabit. Of particular interest if Horus, his fate is known to those familiar with the mythos, and its interesting to see the seeds of his future, and see him before his fall.

That grim future is one of the aspects that attracts me to the 40K universe. It's very over the top, with enemies on all sides, and within if you're not careful. The basic premise is that humanity had once spread across the stars, but contact had been lost, and Earth was now reclaiming the lost colonies. Naturally many resisted, and that's were the book starts with the subjugation of one such world.

As is often the case with these books the action soon involves aliens, and while they're not the most imaginative foes, they are sufficient to provide for some good action. The writer's style works well for the story, it has a sombre formality which matches the nature of the Imperium, but also well paced action for the fighting.

My only real complaint was that the ending feels a bit rushed. I would also have liked to have learned more about the second set of aliens. Overall though, I enjoyed reading it. It portrays the world in a detailed fashion, yet at a steady pace. It also has a few philosophical moments with so solid insights. A good read. 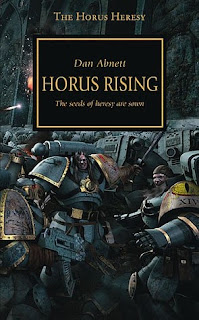 After thousands of years of expansion and conquest, the imperium of man is at its height. His dream for humanity nearly accomplished, the emperor hands over the reins of power to his warmaster, Horus, and heads back to Terra. But is Horus strong enough to control his fellow commanders and continue the emperor's grand design?