The Rift War Saga is one of my favourite fantasy series. I don't read as much fantasy as I used to, and I wanted to revisit the world I'd read so much of years ago. The world grabbed me as immediately as it did before and I enjoyed re-reading it as much as the first time - perhaps more.

The book (and the series) greatest strength is the world build. It's richly portrayed and supported by detail that isn't revealed. This is in part due to the author basing the core tenets on civilisations that are familiar from history, but also drawing something new from each. It also captures well the glimpse of the world beyond the confines of the story. As I've previously read the rest in the series I know what it expands into - and I"m looking forward to re-visiting those as well!

Of course, a well realised world isn't enough on its own, and the events of the story develop into something quite epic. And yet it remains quite a personal story for the main characters. These are as richly presented as the world they inhabit. Great care is taken to describe the feelings of those involved, so they are not puppets for the plot. Although I would say that this is also the only real complaint I have about the writing - that the author tries too hard with this aspect.

But that's a minor complaint. The writing is accessible, without being simple. For a reasonably long book the pacing is good, and the plot draws you through the pages. For me, this remains one of the classics of modern fantasy. 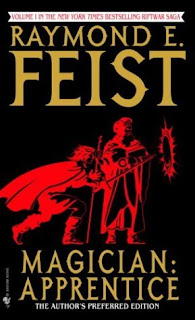 To the forest on the shore of the Kingdom of the Isles, the orphan Pug came to study with the master magician Kulgan. His courage won him a place at court and the heart of a lovely Princess, but he was ill at ease with normal wizardry. Yet his strange magic may save two worlds from dark beings who opened spacetime to renew the age-old battle between Order and Chaos.

Posted by Michael Brookes at 11:01