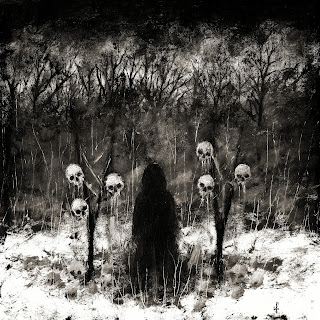 That fun time of the month has arrived and I have picked the three winning stories for September's Short Fiction Contest and for the first time a poem has won the competition! I say this every month, but this month's image by the wonderfully talented Luciana Nedelea (check out her other amazing artwork here: https://www.facebook.com/LucianaNedeleaArt) attracted an impressive variety in stories. It's not an easy task to pick just three winners, but it's also an enjoyable one!

Before announcing the winners I'd like to thank everyone who entered and to everyone who helps support this monthly contest by reading and sharing.

Congratulations to the winners and here are their stories:

Mary, Mary, dead 'n buried,
How does your garden grow?
With tainted blood and bone-rich mud,
Skulls leering in a row.

Parents weep, their sons asleep,
Why did you take them so?
Their souls have left their bones bereft,
I tried to tell them no.

Can you blame the touch they gave,
Did your dress lead them on?
Not their's to own, nor their's to touch,
Now they are dead and gone.

What is solved by blood and tears
This world will never see?
For these young men, it changed all things,
They hurt none after me.

The Last Child of Eden by Pete Fisher

The light had been sucked from the land many years ago. Plump flesh that was once warmed by the Sun was now just a distant memory and the stuff of tales that had, upon a time, been told by the Grey people.

“Draw closer, my child,” a bony hand extended from the ragged cloak. The child turned its head towards the sound of the voice; eyes closed where vision no longer remained, and nostrils expanding in the hope of smelling food.

The fire was leaping into the sky, revered by all. It had become the sun, the moon, the stars the giver and the taker of all things.

“Hold my hand child, I will tell you the story of warm sun, green fields, full bellies and water that flowed in rivers and streams that had not been tainted with the taste of death.”

Paper-thin flesh stretched over fragile bone that could hardly feel the sensation of a touch. The nerves that would transmit these senses to the brain were dying; a merciful relief from the torment of pain, but a cruel deprivation of the touch of love.

“Can you feel that, Child?” A thorn was slowly pushed into its hollow cheek.

“It is whatever you want it to be my child. Remember this: all the while that you can hear me, and your mind can conjure the images from my words, I can take you to those lands of long ago. To that place where a child like you was the hope for the future instead of the legacy of the curse from the past.”

A tapestry of images was weaved in the child’s mind with words well measured and chosen, and the child smiled. “It is beautiful. It is beautiful … never before have I seen it so vividly. Will I soon feel the warmth of the sun on my skin?"

The child was lifted and cradled in bony arms and they moved into the fire. Its flames, for a moment, bowed before them and then closed them in its embrace.

“I can feel the sun, I can feel it upon my skin. It is wonderful. Will you walk with me in the summer meadow?”

“It will be my honour to do so, for you are the last of your kind,” said Death.

…and there he stood, immobile, seized by the forest floor and pulling with all his might and mind to escape. The scars ran the length of the sky, reaching up and scoring with dark fingernails, deep. His feet; entrenched in skull and calcium of all shapes and sizes begged for freedom. Stretching out his arms and flailing, he grasped at the air and wrenched forth only coal; pitch that stained his hands and chalk that drenched his calves.

The creature, for that was all it could ever be, beckoned.

A silhouette, hunched and black. Blacker than the night’s cloth, it must have seen him, though he couldn’t know for sure. The last vestiges of light ran from those spindled tree fingers and he could all but make out the sound of a sigh in the far distance.

It was the feet, or lack there of that frightened him so. They vanished into the ground and clung. Their dark trails spread, like water on a canvas and diluted the forest carpet from ashen white to cinder oven grey. Then it came; fluid and frantic in equal measure.

The faces on the stumps watched, leered on, stared at what he knew would be, and could only be. He tugged. His sunken limbs flailed and ripped at the ground. For a moment he thought he felt something moving beneath; a worm maybe? Each time he looked back it felt as though the spectre paused. He could all but feel its smile creeping out from the dark and taunting him.

There it went again; the squirm, the slither…no, a tug. His right foot edged closer to the surface, his left still staunch and onward came the dark.

The soil, sodden and yet frozen, the air, heavy but still open. He could feel the hope crawling up his spine, like a wish set free…and then the right loosed. His shoe lost below, but his foot felt the surface once more.

His joy immeasurable until he looked back.

The dark lunged and dowsed his left leg in an acid heat. The night’s steam scolded and tore it from him. The scream shook the forest and seemed to destabilize the moon. A shaft fell to the floor and revealed the bloodied stump but also a desperate chance.

With one leg he flew forward and down. His nails tore at the lichen and swam in the earth. With every “step” he edged farther and farther from the dark. He could see the Sun, edging higher over the mound. A chewing sound echoed in the back of his head. As his palms warmed in the morning heat, he stole a glance back.

Posted by Michael Brookes at 14:10