An Odd Quartet was my first released collecttion of short stories. The first story is called 'The Yellow Lady' and was based on a ghost story I heard when I was a young lad, although with a twist in the tale. Here's the opening scene from that story:

I’d visited the grave of the Yellow Lady many years before. Behind the screen of threadbare trees I’d camped on the rough field. The grave looked the same as I remembered. Now of course, I didn’t fear at its stark shape. The graveyard had existed for centuries. The more modern road lined one side; the occasional passing car disturbed my concentration. To complete the triangle an old chapel stood sentry.

Thirty years ago I’d camped here with dozens of other boys my age as part of a youth camp. The field in which we camped nestled against the graveyard. The tent I slept in lay within spitting distance of the infamous grave.

The camp was much like many others designed to keep poor kids occupied and out of their rough estates for one week out of the year. I loved it. I was used to the grimy city streets, the week in the countryside showed me an aspect of the world I’d previously only read about.

Through the day the camp volunteers kept us entertained with games and a myriad of activities. At the foot of the field lapped a large lake which drained into an even larger marsh. In the lake we swam and tried to catch fish with small nets. We frightened each other with tales of giant pike who would bite our legs if we weren’t careful.

We continued trying to scare each other in the evenings. By the campfire we ate burned burgers and told ghost stories. Our stories amused the volunteers with the thankless task of keeping us in order. They kept their story until last and we all sat spellbound as the group leader told the tale.

The Yellow Lady had been buried in the small cemetery well beyond the safe glow of the fire. At first she was buried in a pauper’s grave, not anymore. Now she lay encased in an iron casket, with iron spikes driven through the coffin. Her headstone was not the usual carved stone, but instead formed from iron in the Celtic form. Iron spikes ornamented the cross.

The old man teased us, well practised in the telling of this story. He told us of the young woman, betrothed to the local Lord. They were paired in an arranged marriage that would provide him with finances for his estate. She’d gain nothing from the partnership, but her father would enjoy the patronage of aristocracy.

But she didn’t love the Lord, she already loved another. She loved a woodsman and he loved her in return. Even after the marriage ceremony she continued to see her love in secret.

We didn’t care for that part of the story. At ten (or maybe eleven?) years old I hadn’t yet acquired the taste for girls. The old man’s voice carried the story well, and despite the smoochy bit, we remained captivated.

Inevitably the Lord discovered his wife’s infidelity. She arrived at her lover’s hut, deep in the woods. She found him purple faced and hanging from the tree. His hands and feet had been cut off then placed in a basket.

She rushed to her lover’s dangling corpse and screamed to the sky in her grief. The Lord stepped into view. He battered her to the ground and in his rage cut out her heart and nailed it to the tree from which her lover hung.

To this day it is said that you can put your ear against the weathered tree and hear the heartbeat of the murdered woman. None of us felt brave enough to test the truth of this.

Next the Lord severed her head from her body. He cast the head into the marsh – never to be found. The woman’s body was buried in a pauper’s grave in the grave one hundred yards from where we sat.

A year passed. The Lord found himself a new wife, and with great ceremony they were married. Both merry from the celebrations they took to their bed together for the first and last time.

They were both found dead the next morning by the servants, with a yellow handprint upon their faces.

The next night the parish priest reported seeing the apparition of the Yellow Lady leaving the graveyard and heading towards the marsh, searching for the corpse of her lover. He naturally made the connection with the deaths from the previous night.

However the hand marks had faded with the rising sun. Only he and the servants who summoned him witnessed the prints with their own eyes. So everyone ignored his warnings. Their attitude changed rapidly when more people from the village witnessed the ghost for themselves.

With no natural heirs the Crown appointed a new Lord who duly arrived and was found dead on his first day break. This time people listened to the priest and luckily for them he had a plan.

They exhumed her body and bound her in a coffin made from iron and blessed by the priest himself. The blacksmith then drove iron spikes through the coffin and constructed the formidable metal cross to bind her to the grave. Only on the anniversary of her death could she wander, continuing her search for her head and her lover’s body.

And you know what? The anniversary coincided with the week I stayed at the camp. I remember it being the scariest night of my young life. At every rustle I lay rigid, my eyes frantically scanning the foggy gloom. But of course I lived to see the next day. Although a few of the boys claimed they’d seen the ghost heading towards the lake.

So why am I back here after thirty odd years?

Well the story I was told all those years ago contained some truth, but was missing one interesting and valuable fact. The body was buried with what was described as a finely crafted gold and diamond locket. The locket was of a type highly prized at the time, but very rare now. And rare meant valuable.

And valuable was good. It’s how I earned my living.

Many years ago I got myself into a bit of trouble. I owed the wrong people more money than I could lay my hands on. Whilst drowning my sorrows in anticipation of one or both legs being broken I met a funeral director, also trying to drown his sorrows.

From this drunken man I learnt something interesting. Even in these modern times people are often buried with valuables or a treasured item. Usually it’s junk, but often it’s worth fencing.

Wherever possible I focussed on tombs. They’re usually owned by rich people and while they’re not more likely to leave a memento, it is more likely to be worth something.

The other advantage of course is that tombs are generally less effort to get into than digging into a grave. The obituary columns in local newspapers and on the Internet provided me with likely targets. After a while I developed a sense for spotting a target from how the obituaries were written.

I’d known about the locket for years, but I’d kept it safe in case of a rainy day. The regular pickings had been slim for the past couple of months, so the rainy day now arrived.

To dig up a grave requires a lot of effort. This graveyard was secluded, but not enough to make it safe to use a mechanical digger. That left me with the shovel. At least the work helped to keep me warm in the chill air. As the night turned into morning the fog rolled across the graveyard.

The scene reminded me of cheap horror films. I wasn’t spooked. I’ve robbed graves for many years without encountering any ghosts or ghouls. Still the air was cold, colder than I expected.

Thankfully I only had to dig up part of the grave. If I had to dig up the whole grave I would have still have been digging a hole when the sun rose. I only needed to dig enough space to access the coffin. Then I would cut into the coffin and use a flexible grabber to retrieve what I needed.

My spade struck the coffin with a dull clang. I scraped the soil away; the dirt stained red as if soaked in blood. In the thin torch beam I noticed the coffin was rusted. I nodded to myself. I’d hoped that would be the case. Retrieving a cold chisel and hammer from my bag of tools I struck a hole into the coffin.

With a small crowbar I widened the hole. This is the part I preferred old graves to fresher ones. They didn’t smell as bad and were less messy once you delved inside. Someone must have been smiling down on me; I’d dug up the right end. Dropping a chemlight into the hole I spotted the sparkle of the necklace. Exactly what I hoped to see. Within minutes I packed up my tools and was driving my dirty white van back towards London. 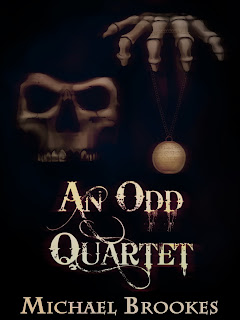 An Odd Quartet is a collection of four dark short stories, each with a twist in the tale.

A grave robber encounters a ghost from a story he was told as a child.

At the heat death of the universe, the Grim Reaper contemplates his existence.

A special forces team enters a suburban house to rescue a family taken hostage, they encounter more than they were trained for.

A young demon prepares to take his possession exam.

This Drabble Enhanced edition also includes some of my favourite drabbles (100 word stories).

An Odd Quartet is available from these online stores:

Posted by Michael Brookes at 22:02