Following on from this morning's interview with Drew Wager, here is the next interview, this time with   John Harper.

Remember you can help the Elite: Dangerous project take off, visit the link below for ore information: 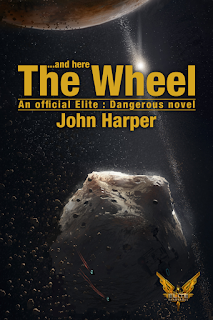 Please introduce yourself, who are you and what do you do
Hi my name is John Harper.  I'm thirty years old and I have a little girl and boy.  By day I'm a chartered engineer managing industrial design and build projects.  By night I'm a science fiction author of both short stories and novels.  I live in Wellington, New Zealand with my wife and two kids.

When did you first start playing Elite and why did you come to love it so much?
Elite came out on the Atari ST in 1988 and my father got hold of the game in 1989 when I was seven.  The games I had played up to that point were small and limited, e.g I could drive on this track, land on these platforms, had discrete levels, etc. Elite was completely different.  I still remember the chill I felt when the game booted up and the Cobra Mk III spun up onto the screen with the Blue Danube 'beeping' in the background.  (I downloaded an emulator earlier this week and ran the game and got the same chill again - plus a silly grin on my face).  The Atari ST version was filled with graphics and so every trade item, every piece of equipment every planet had a little picture representing it.  These alluded to this great big universe out there filled with detail, detail only brushed upon by the game (and the manual, which I read in bed in place of actual books) and my mind filled in the blanks.  The places I could go and the things I could do were totally unrestrained, unlike my real life at the time which had too many of those 'rules' around it.

Elite opened my mind to space ships and science fiction, to classical music and to the dream of freedom.  The sense of wonder that Elite gave me is something that has never left me and is something I try to emulate in my own writing.

Have you reached Elite status in game?
On the Atari ST I did.  The Elite emblem flashed up on the page when I docked.  And that was it. . . I have only reached Dangerous on Frontier and First Encounters

What inspired you to start writing?
My first writing experience was in my second year of primary school.  I had watched Short Circuit on the weekend and wrote my own rendition in class.  The teacher made my writing into a book with wall paper covers which I then illustrated.  Later that week I found myself standing in front of school assembly reading the story out to the whole school.  I remember pausing and turning to the teacher behind me to tell her that a sentence didn't make sense.  She urged me to just keep reading.

Every time there was a option or time to write in school I seized that opportunity.  I wrote stories about time travel, buried alien technology, fighter plane pilots, and my favourite, an american army captain who had a sub machine gun and an attitude.  There were many Elite stories in there as well, about fleets of mirage Vipers and missions to Raxxla.

So I can't remember exactly what the inspiration was, but it has always been there.

You're gathering funding to secure the writer's pledge on the Elite: Dangerous Kickstarter - how's that going? And where can people go to support your effort?
I have currently sourced 20% of my funding and it is going a bit slower than I had hoped.  As I am not a UK or US citizen I have had to go to Indiegogo instead of Kickstarter where the actual Elite:Dangerous is being funded.  I believe this is hindering my funding as the fans I am trying to access are all on kickstarter and finding my page and setting up a second crowd sourcing account are all barriers that work against me.

Do you have a story idea if you're successful with the pledge? Can you tell us anything about it?
Absolutely.  I wouldn't go to an editor or publishing house and ask them to fund my novel if I didn't have an outline (at the minimum) to show them, and I feel the same way about crowd sourcing.  If people are going to part with their money upfront they should be able to see and understand what they are paying for.

On my Indiegogo page I have included my 'elevator pitch', the back copy and a two page synopsis on the story.  It is full of spoilers which I won't go into here but the one sentence summary is: "A Pirate Lord ambushed by 'The Elite' must join forces with an Alliance operative to find Raxxla and thwart a plot to start a Galactic war."

Obviously the plot will evolve as the novel is written but this is the core of the story.

My writing style is quite spartan.  I don't give a lot of detail on the characters looks and I definitely don't write the old 'look at yourself in the mirror' routine.  I characterise my characters through action and their emotions - how they perceive events and how they react to them.  I am the same with settings and although the balance is quite hard in science fiction, my goal is to give just enough information to allow the reader to fill in the blanks and create their own version of the new and extroadinary world I'm writing about.

Do you have any other writing that we can read?
I've done a bit of Elite fan fiction set after First Encounters.  Its a group project with separate protagonists who meet and came into conflict.  I have also written a few solo Elite stories and these can all be found at: http://www.frontierastro.co.uk/FEU/feu.html.  (My protagonist is Vasquith de Havilland though I also wrote from the POV of all the characters at various points).

However, the bulk of my writing has been original work.  You can find some on various Ezines around the Internet, though some have probably disappeared.    I have some short stories that haven't found homes yet.  I have a pending rewrite request on one as we speak.    I have written two novels.  One is finished but was done more as a learning exercise and is not something I will be looking to sell.  The second is undergoing its final edit before I start shopping it around to publishers (but if my Elite novel gets funded then "...And Here The Wheel" will take primary focus).

Of the four stories I've submitted to the Writers of the Future competition, all four have received 'Honourable Mentions'.  I have also been involved with the Pioneer project, writing the backstory as well as the history and modus operandi of the various factions.  I also produced a cover letter for Pioneer, a nice little piece to introduce the player to the world, a lot like the letter at the beginning of the Frontier manual.

What makes the Elite universe so interesting to write a story in?
Its vastness and its mystery and its complexity, which looks simple at first glance, but becames deeper the more you study it.  Those that have read the journals in First Encounters know there is so much going on around the galaxy and with Elite:Dangerous this will be expanded on.  And then there is Raxxla and INRA.  How many dreams have been borne and dashed against the shores of that mystery?  Generations of spacers enticed by whispers of alien technology only to be destroyed by a self appointed Protectorate of Elite pilots.  Eighty percent of the colonised solar systems are independents and this is where the real drama will be:  wars, smuggling, rights for mining, political and economic pressures, completely separate from the 'big' wars of the Federation, Alliance and Empire.  The fringe of the Elite galaxy is an untapped resource that I'm extremely keen to explore.

Why do you think you can write a great Elite story?
I'm a thirty year old father of two, yet whenever I do a doodle its of a coriolis space station.  That is how deeply ingrained Elite is to my being.  Great stories come from the heart, from a passion, a desire, a NEED to tell the story.   Elite is something I've always had passion for.  I haven't been a gamer since I left University but Elite is something I'm backing and getting involved with as much as possible because it isn't just a game to me.  It is an indelible part of me.  Having written well received fan fiction I believe I know what people are looking for in Elite fiction.  Combine this with my writing style which is stark in its nature, focusing on the emotion of the characters in the story and I think you'll have the recipe for a fantastic Elite story.

Do you have anything else you'd like to share with us?
If you are a fan of Elite and a fan of written science fiction, please stop past my site and pledge as much or little as you can.  There are other crowd sourcing novels out there, some that have reached their funding, some that haven't.  I believe that the more official elite fiction we create as a fan group, the more diverse, deep and enjoyable our Elite:Dangerous experience will be.    I don't think you will be able to top the experience of reading a novel about people and places and then loading the game and visiting those same places and seeing those same characters, maybe even lining them up in your crosshairs!

Thanks for everyone that supports and hopefully I'll see you out in the Elite universe some time after March 2014. 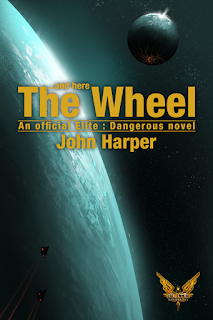 Thanks to John for sharing his time with us, I'm waiting for other Elite authors to get in touch, when they do I'll post their interviews.
Posted by Michael Brookes at 15:55