As posted earlier today I will be running a special feature on the various authors taking part in the writer's pack pledge in the Kickstarter funding for Elite: Dangerous.

You can help fund the Elite: Dangerous Kickstarter by visiting: 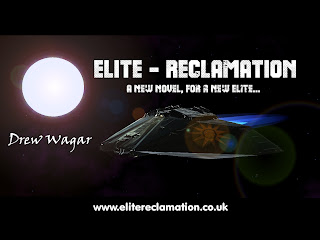 Please introduce yourself, who are you and what do you do?
My name is Drew Wagar, I work in London as an IT Manager during the week, looking after a great team of developers and support engineers who deal with generally rather dull compliance and reporting web-based applications. I'd like to be a full-time writer, but it doesn't pay the bills yet. Maybe one day. I have a wonderful wife and two young boys who soak up most of my remaining time, along with a soppy labrador and an indifferent tabby cat. My favourite colour is dark green.

When did you first start playing Elite and why did you come to love it so much?
1984, when it was first available on the ZX Spectrum. As a young lad I was very much into space at the time, along with the sci-fi series such as Star Trek and Battlestar Galactica. Elite was my turn to be the pilot! What I loved about the game was that you could be who you chose to be; good, bad or worse. I enjoyed being able to upgrade my ship, and venture off into the unknown. Following the missions was great fun, ever wary of the occasional Thargoid menace. It felt as if you were part of something much larger than just a game.

Have you reached Elite status in game?
Yes, I genuinely reached 'Elite' on the Spectrum version, but I never found enough time to play the subsequent versions long enough to get all that far. I did enjoy sling-shoting around gas-giants in Frontier.

What inspired you to start writing?
I've loved books ever since learning to read with Enid Blyton's rather less well known 'Adventure' series. James Blish's Star Trek novelisations were an early influence. Robert Holdstock's 'The Dark Wheel' was the first book that actually got me to try my hand at writing. I was only 13, so it was a predictably awful outcome, but it set me on a path. I still have that 'first attempt' in a file. It does contain the basics of characterisation and plot, so I guess I had some potential.

You're gathering funding to secure the writer's pledge on the Elite: Dangerous Kickstarter - how's that going? And where can people go to support your effort?
I can't claim credit for coming up with the 'Kickstarting a kickstarter' idea, but I believe I'm the first to be successful at it. I've been overwhelmed by the support from the fans, old and new. We made 50% of the target in five days, and then it accelerated, hitting the magic number in a mere nine days. I put that down to being able to point at my previous 'Oolite' works and following the kickstarter guidelines assiduously - putting a lot of effort into the videos seems to make a big difference. Right now we're north of £5k, so well into the stretch goal territory. Still plenty more to go, as we'd like to be able to do a traditional print run, so please visit

Do you have a story idea if you're successful with the pledge? Can you tell us anything about it?
I do indeed and can let you into a few details. Unlike many, I'm a writer who doesn't dive in and start writing straightaway. I like to have a very well developed plot before I start. That process has begun, but it's nowhere near finished as yet, partly because I need some detail from David and yourself - hint hint! :) That said, the plot centres around a revolution; a political coup in which a despotic ruling line has been overthrown by a rebellion within a close group of starsystems. This rebellion leaves rather too many loose ends and one of these comes back to haunt, no not haunt... to hunt them down.  There's a 'trailer' of sorts available, which gives a few more clues here >

Do you have any other writing that we can read?
I have several. There's the Oolite saga for starters, which is set in the same universe as Elite (pretty much), you can find that at www.wagar.org.uk . There are some short stories set in the Oolite universe there too. These are all free for obvious reasons. If you fancy a more contemporary book, my novel Torn is a drama based on the perceived conflict between science and religion, played out in a country village in Kent between a staunch atheist and a newly zealous born again Christian. Sparks fly as you can imagine. That's available on Amazon here >

One of my short stories (A rather Arthur C. Clarkesque hard sci-fi story) was recently selected to be in the Fusion anthology, also on Amazon >

What makes the Elite universe so interesting to write a story in?
For me it's the already established backdrop, which means much of the 'world building' has already been done. There's no need to explain the background politics, the ships and weapons and so on, because it's already been referenced before and the fans know it well, often better than I do! I view Elite as a sort of 'wild west' in space; there's the familiar and the unknown, a sense of crossing frontiers, technology which is advanced, but not enough on its own to ensure safety. There's also the aspect of being a thousand years in the future. The Elite universe is no sanitised and uplifted version of the human race like Star Trek. Mankind's darker side is just as, if not more, prevalent. That's a rich tapestry for any writer. You've got to be a little careful not to drift into 'film noire' all the time, but it's still a wonderfully diverse place as a setting.

Why do you think you can write a great Elite story?
I've lived and breathed Elite since I was 13. I'm only a little younger than David Braben himself, so I feel I've grown up alongside the Elite story. I, rather worryingly perhaps, know the Elite universe inside out. I hankered after more adventure in that universe and felt compelled to write more. I've developed my craft as a writer since I started taking it seriously about ten years ago and that experience counts. I've learnt a huge amount about the process during that time. My focus is always on the characters and the plot, I'm less interested in the scene setting. I aim for memorable situations and characters. I've had a lot of fan email demanding sequels and addendums, particularly for the Oolite saga, so here's my chance to make a mark on the 'real deal'. I don't intend to waste it.

Do you have anything else you'd like to share with us?
Only that it's an amazing privilege to have this opportunity. I'd like to take a moment to thank all the pledgers on my kickstarter. Many I do know personally, but the vast majority of them I don't - and for them to place their trust in me to do this is extremely humbling. To write a book in the Elite universe is a dream come true for me, a circle rounded which started back in 1984. To be able to interact with David Braben after admiring his creation for nearly 30 years certainly gives me pause when I stop to consider it. Thanks to all who've helped me get here, I promise not to disappoint.

Posted by Michael Brookes at 12:45