We now welcome Commander Boz to the Elite: Dangerous author interview. You can read what he has to say below. But first a word from our sponsors:

Take a ship and 100 credits to make money legally or illegally - trade, bounty-hunt, pirate, assassinate your way across the galaxy.

Support the Kickstarter for this awesome game! 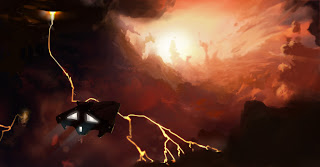 Please introduce yourself, who are you and what do you do?
Hello.  I'm Boz.  Well, I'm not really, Boz is just an online handle I stole from Dickens.  I'm a physicist by training, but I now dabble in the dark art of education.

When did you first start playing Elite and why did you come to love it so much?
I started playing Elite some time around '91, and just loved the freedom it gave.  There was always more to do, and there were very few games out there that did that.  However, it was Frontier that absolutely gripped me.  I really believe that if Frontier were slightly upgraded and re-released it would still sell millions.  I loved being able to visit Earth, fly to Mars or Jupiter.  I learnt the rudiments of orbital mechanics, and I have no doubt it played a part in my ending up as a physicist.  When I saw Elite: Dangerous was going to be crowd funded, I pledged within a minute, and soon 'Jontied' my way to the highest tier I could afford.

Have you reached Elite status in game?
No, never.  I've been Deadly in both Elite and Frontier, but to be honest it didn't bother me so much as getting out there, building my ship up and taking whatever missions came my way.  That's the beauty of the game, there really is something for everyone, and this latest iteration of the game will blow even Frontier out of the water if it's half as good as I'm hoping.

What inspired you to start writing?
I've always been relatively good at creative writing.  I remember reading 'The Practice Effect' by David Brin, and then being overjoyed to be given a creative writing task to do in my English lesson at school.  The new physics introduced in the story really inspired me.  Science fiction just opens up so many fantastic possibilities, so many new contexts in which to explore the 'human condition' that literature has sought to describe throughout civilisation.

You managed to get your project funded on Kickstarter.  Do you have any advice for anyone attempting to do the same?
I had the advantage of being somewhat known on the comments thread on the E:D Kickstarter page.  I didn't have to blow my own trumpet much, I had a few loyal fans who promoted the project for me.  I was certain until around 48 hours before the deadline that my project would sink without trace, but the way that the E:D community swarmed to the project's rescue was awe inspiring.  With such fantastic support behind it, there's no way Elite: Dangerous won't get the funding it deserves.  My advice?  Just put your idea out there.  Don't be afraid to promote it a little, and just be humble.

Do you have a story idea if you're successful with the pledge? Can you tell us anything about it?
Absolutely.  I'm not an established author, so I had to put the story out there to inspire people with the confidence to fund the project.  The writing's not terrific, but it seemed to capture the imagination of enough people to make it a success.  Please do check it out on the original Kickstarter page:

Do you have any other writing that we can read?
Not fiction, I'm afraid.  If you're a Chinese engineer working with nuclear reactors, you may have read some of my academic work :)


What makes the Elite universe so interesting to write a story in?
I loved the fact that alien races were so varied in the original Elite.  To some extent I've been inspired by that in formulating the plot of my story.  But as with any science fiction, it's the fact that it's only the laws of physics and one's imagination that put any constraints on you.

Why do you think you can write a great Elite story?
I'm just excited by the plot I've developed!  I hope the people who've backed the project will be happy with it.  If it takes the reader on their own voyage in their imagination then in my view it will have succeeded, whether that's one person or a thousand.  I think at heart that's all any artist aspires to achieve.


Do you have anything else you'd like to share with us?
Yes.  Look up Amplifier, the band.  Listen to their album 'The Octopus'.  You won't regret it.  Am I allowed to say that?