Book Review - The Book of Cthulhu by Various

It's fair to say that I'm a huge Lovecraft fan and the Cthulhu mythos in particular. Here we have a collection of short stories based to varying degrees to that mythos and there's some well known writers here - which unfortunately leads to the first issue with the collection and that is that I'd read more than a few of these before in other anthologies.

The second issue is common to any collection and that is the varying quality of the stories. I didn't think any of them were bad, but some were truly amazing, while others lagged in comparison. My biggest issue came as a surprise to me. This isn't a curated universe, so there's no guidance as to how the stories should fit with established fiction in this world. That can make for some jarring reading as one perspective shifts radically into another and after three stories in Innsmouth you wonder what is going on!

That isn't a fault with the stories though, more how the anthology was compiled. The stories themselves all have something of value and some stood out for me and made the compilation worth reading. For the most part it was the earlier stories that grabbed me, especially with Ramsey Cambell with the second tale. This had an authentic Lovecraft feel and was exceptionally well written.

The other standout was Charles Stross' cold war redux with the elder gods being the weapons of mass destruction. It was a fun idea that was carried quite well and fitting with the events of the time. I also enjoyed the Jihad over Innsmouth, which was a fun meld of modern technothriller and Cthulhu mythos.

If you're relatively new to the mythos then this is a great book to start with (assuming you've already read Lovecraft's originals!). If you're familiar genre then your mileage may vary, but it's worth checking out. 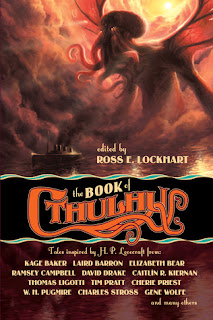 The Cthulhu Mythos is one of the 20th century's most singularly recognizable literary creations. Initially created by H. P. Lovecraft and a group of his amorphous contemporaries (the so-called "Lovecraft Circle"), The Cthulhu Mythos story cycle has taken on a convoluted, cyclopean life of its own. Some of the most prodigious writers of the 20th century, and some of the most astounding writers of the 21st century have planted their seeds in this fertile soil. The Book of Cthulhu harvests the weirdest and most corpulent crop of these modern mythos tales. From weird fiction masters to enigmatic rising stars, The Book of Cthulhu demonstrates how Mythos fiction has been a major cultural meme throughout the 20th century, and how this type of story is still salient, and terribly powerful today.


Click here to buy The Book of Cthulhu from Amazon
Posted by Michael Brookes at 17:33