Before I start I should declare that I've worked with the author as he's edited some of my work. However it is his original Auto series that was the clincher to working with him and my opinion of his latest release isn't coloured by that collaboration.

Quite simply I loved this.

No surprise there you might think (after the opening paragraph of this review), but let me explain why and then see what you think!

This is one of those rare sci-fi books that slips a science fiction story by you without realising it. The core premise is very grounded in current technology with devices called 'autos' that manage our digital lives. This includes identification, social media, finances - everything in the digital realm. The technology has become so ubiquitous that everyone relies on it and it's become ever more autonomous.

In the first book there was a series of short stories that focused on specific aspects of what such devices would means to us. It was quite clever in that as you read it it you started seeing connections between the stories until it evolved into a cohesive whole by the end. Here we have a similar format, but the overall narrative is more linear than the first book. This makes it more accessible, but for me I preferred the the more abstract approach of the first book.

A core component of a believable world is that it makes sense, the technical grounding here is very solid and transparent to the reader, but how the characters live in that work highlights some of the issues visible in society today.It's their actions and feelings that make it a living, breathing world. There is a complimentary blend of characters here, which represent a microcosm of society. They contrasted each other nicely and the short story format allowed the differing views to be handled with greater depth.

For me the only weakness was the police officer Young - she felt a little cliched. Not because such characters don't exist, but more because they tend to get used so much. She does fill the role well though, adding some physical menace to the story.

I especially enjoyed the exploration of online religion as party of the story. It's an interesting development that in many ways echoes the evolution of more traditional beliefs in the physical work.

Last, but not least is the quality of writing and it was this that first encouraged me to work with the author with my own projects. The writing is crisp and keeps the momentum going and makes this book a joy to read. 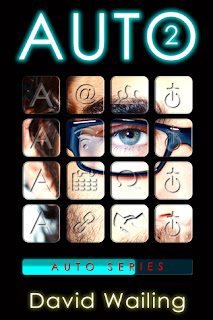 Digital detective Joanna O’Donnell’s investigation into a dangerous hacktivist group has ended with her partner dead.

But death is no longer the end. Your auto can keep running after you’ve gone, interacting with those you left behind. So Greg Randall’s auto – Greg A – lives on as a digital echo of the man Joanna loved. The man she got killed.

Joanna discovers Greg A holds the key to the catastrophic revolution the hacktivists have planned. When every auto in the world will betray its user, exposing all secrets publicly on the internet.

A revolution that history will call the First Auto War…


Auto 2 is the second full-length novel in the Auto Series.

Click here to buy Auto 2 from Amazon
Posted by Michael Brookes at 13:26