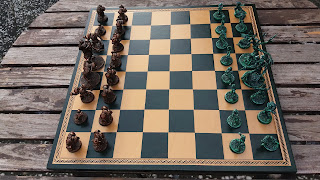 All figures are mounted on textured bases which have been weighted and felt bottomed for easier movement and protection of the board.

The board in the pictures is included.

The Elven team is painted in forest silver and contains the following:


The Orc team is painted in war-torn bronze and contains the following:

The chess set is available from the Old Ones Productions store here:

Posted by Michael Brookes at 15:51