Note that this book appears to have had a name change since I first downloaded and is now called 'The Third Testament'.

This book has languished on my TBR list for quite some time and now that I've finally read it I can say that if it's in your TBR list then you should get round to reading it! It's a technological thriller, but will a metaphysical twist and one that is exceptionally well layered.

It's main strength is how it builds the mystery of the world changing events. It captures the strangeness of what's going on by following a small number of characters, while still maintaining the global effect of what is going on.

The quality of the writing is excellent and explores some interesting concepts. The technical side is well handled providing enough detail for those (like me) interested in such things, but not so much that you're wading through details.

For all of its strengths it does have its faults, the most obvious of which is that it's longer than it needs to be. In parts it feels more like a character study, although fortunately the writing and characters are robust enough to carry this.

My other complaint was the reveal for what's going.While the basic premise works well, there are some aspects that seemed thin and unqualified, so fell a little flat. Especially when considering how effectively the author built the story up.

In fairness those are both minor considerations, this was a quality read and a cracking thriller, one for science fiction fans and those who enjoy something a little more contemporary. 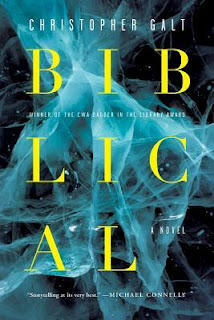 A strange phenomenon is sweeping the globe. People are having visions, seeing angels, experiencing events that defy reality. Bizarre accounts pour in from distant places: a French teenager claims to have witnessed Joan of Arc being burned at the stake; a man in New York dies of malnutrition in a luxurious Central Park apartment; a fundamentalist Christian sect kidnaps and murders a geneticist.

Then there is the graffiti WE ARE BECOMING that has popped up in every major city around the world, in every language. And everywhere people are starting to talk about John Astor, the mysterious author of the book that seems to be at the center of it all.

After a rash of suicides around the world by individuals experiencing the time traveling hallucinations, psychiatrist John Macbeth and a team of FBI agents and scientists assemble to find out what’s going on before it’s too late. Is this a spiritual phenomenon or something more sinister?


Click here to buy Biblical from Amazon (and it's a fascinating read)
Posted by Michael Brookes at 18:36