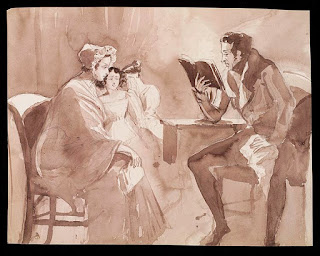 Who knew that so many different tales could be inspired from March's Short Fiction Contest winners? There were many interesting stories and as always, it wasn't easy to pick just three winners. I'd like to thank everyone who entered, there was some real talent on display. Thanks also to those who support the contest by reading and sharing the links - your support is much appreciated!

And now to announce the winners:

Congratulations to the winners and here are their stories...

The Great Narrator by John Moralee

There were not many jobs for burnt-out ex-gamers like Cross. Morbidly obese and housebound, he had to take any paying gig, like the one from an anonymous client in Beijing, who sent him a cosy picture of a Dickensian family.

“I want to experience a world like this,” the client instructed. “Make me a pretty young maid in love with my master, a handsome widowed gentleman. I want a hot romantic affair. Can you do that by next Monday?”

Cross ended the call and lumbered into his gaming chair, switching on his computer, sweat breaking out on his pimpled forehead. “Create a Dickensian London, circa 1870. Run program.”

The Great Narrator – a first-gen AI - built the virtual environment from real historical data and source material, instantly plunging Cross onto a cobbled street in an authentic simulation complete in every way – except it lacked characters.

Cross instructed the AI to add people based on census data and Victorian literature. The streets were immediately populated with interactive characters.

On Monday night, after working for days with no sleep and no rest, Cross found himself playing Edith Sharpe, a young scullery maid working for Mr Charles Greyworthy. It was late in the evening in the virtual world. Edith was eavesdropping at the study door as her master told his children a story before bedtime.

Cross had Edith sneak into the study, staying in the darkness near the door, out of the candlelight. The family were unaware of Edith’s presence. The children looked so content, enthralled and delighted by their father’s melodic voice, telling a fantastical story of dragons and princesses. Hmm. Something wasn’t quite right. One of the children looked like a kid in a reality show. Cross would have to fix that before sending the client the access code.

Cross had programmed it so Charles would catch Edith watching him and scold her for entering uninvited. She would run from the room in tears. Later that night Edith would hear a knock on her bedroom door and have a night of passion, but right now Cross had to fix a few details in the current location. Time to finish. He worked faster, changing details, making improvements. Cross felt his heart pounding too hard – but he kept working, ignoring a pain in his arm. He had to finish the job. The pain expanded into his chest. Pure agony.

But the pain stopped.

Cross was stunned. There was nothing to go back to in the real world. His physical body was dead. If he ended the simulation, he would die, too.

It wasn’t so bad.

His new family were waiting.

You by Betty Rocksteady

"You shouldn't be reading this."

"Oh, how dramatic. It's a scary story, I suppose. Do you think the girls should be listening to this?"

"Yes, Mother, let him go on. I'm not scared. Are you scared? We're not scared"

"The words swim up from the screen to meet your eyes. You are telling yourself it's just a story, but you already know it is not a story. It is too late to stop. You opened their eyes. The words are only for you. They are watching."

"The screen? What does that mean?"

"Daddy, what's wrong with your eyes?"

"The portals can be opened in a number of ways. A combination of symbols, motions, movement. The Morse code of your eyelids, the splatter of your coffee. Each innocent action, each measured reaction. A butterfly flaps her wings. Your grandmother spits up blood. Don't look away, it's too late. You are here. After innumerable innocent motions, you are here. You are reading. And you are mine."

"John, you're scaring the girls. Put the book away. You're not funny."

"The pages are blank. They were always blank. You are the book. You are the page. You can't stop reading. It doesn't matter anymore if you turn around. They see you. They can always see you. The words swim up to meet your eyes and you can't stop reading, even if you wanted to. You can't stop. You try to brush this from your mind. You tell yourself you don't believe. But far past midnight, damp with sweat, you bolt upright in darkness and feel the pages brush across your cheek and something is bubbling and they will have you and you will know you always knew -"

"John, stop it! John? Girls! Call the doctor! Oh god, I think he's having a seizure, oh my god what is THAT?"

The Literary Magician by Jonathan Hill

Thomas Brookham was one of the most successful authors of his day. And he’d worked for it. His success was down to his remarkable attention to detail, so vivid and precise that the story and descriptions leapt off the page and affected his many readers more than any other author.

He read out his latest work, tipped by his publisher to be the masterpiece to outshine all his other masterpieces, carefully ensuring there were no continuity errors, no grammatical mistakes and no phrases that fell awkwardly off the tongue. His wife and two daughters sat opposite, silently listening. Their faces were downturned, sad, and tears leaked from their eyes almost continuously. Salty rivers, their source ever replenished. They could not rejoice in his success.

Yes, Brookham was quite the success story of the decade. And his secret? He wrote with an authenticity which was unrivalled in his field. His words came alive to readers in ways which they’d never experienced before. They called him ‘The Literary Magician’.

Writing with such realism came at a price. Descriptions of Parisian sewers felt truer than true because he’d waded through them, faeces clinging to his trousers. Foul-tasting cheeses provoked revulsion in readers for he sampled them himself and vomited up his guts so he was able to communicate the taste with exquisite precision.

He drank piss, he cut himself, he shat his trousers, he swallowed inedible objects… all so he might write more realistically. He once nearly blinded himself just to get a hair’s breadth from losing one’s sight. He was in no doubt that he would have gone the whole way if he didn’t need his eyes for his writing.

There was a knock at the door.

“You’re early,” Brookham said to his publisher. “Come in and sit in there. I’ve almost finished the final read-through. I shan’t be long.”

“There is no need for a final-read through, Thomas. The writing is simply exquisite. I read it through half-closed eyes. So realistic were your descriptions, I could hardly bear to read on. And yet, I did, because with your books, one has to read on!” He clapped Brookham on the back. “Your best yet, sir. Your best yet!”

Brookham ushered his publisher through to the parlour and then returned to the kitchen, where he turned back to the final pages. Pages that described in spectacularly minute detail the climax of his masterpiece. The protagonist’s murder of his wife and two young daughters was so explicitly described it would cause shockwaves in the literary world. And the outrage would exponentially increase his, already excellent, book sales.

He looked up at his family, almost transparent, their tears still flowing, and asked himself if it had been worth it.

He returned his eyes to the words on the pages. The pages he’d lovingly crafted.

He smiled. Yes, he thought. Yes.

Posted by Michael Brookes at 16:09