Book Review - Through a Mirror, Darkly by Kevin Lucia

From the reviews I was expecting more than I got from this book. That's not to say that it's a bad book, but it didn't quite work for me. It's a collection of shared theme short stories with a thin wrapper for some dark secrets in the town of Clifton Heights. The wrapper felt underdeveloped, so the meat was in the short stories and they're decent stories. They cover some classic horror situations, although they were of varying quality.

The first story concerns an Iraq veteran Chaplain recovering from a supernatural sighting while on tour, only to have the horror seemingly follow him home. This was a predictable story with no real surprise - even for the reveal at the end, but quite well told. It did introduce me to an aspect of the authors writing that impacted my enjoyment of the stories - repetition.

Repetition can be a powerful tool in story telling, it can lull the reader into false assumptions, it can reinforce core concepts, but it needs to be used sparingly. That isn't the case here, it is used far too often and isn't just repetition of concepts, but actual repetition of the same phrase - over and over again, It really spoiled the flow of the stories, and gave them an odd pacing. It also made them longer than they needed to be.

My favourite story was the last one, which had a mysterious and short lived haunting. This had less of the aforementioned repetition and had a reasonably novel premise. As such it was a much tighter story and worked well.

Overall it was worth reading, but felt that it needed much tighter development to really stand out. 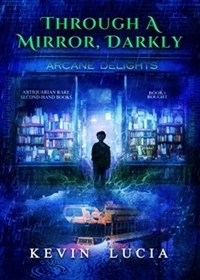 “Arcane Delights. Clifton Heights' premier rare and used bookstore. In it, new owner Kevin Ellison has inherited far more than a family legacy, for inside are tales that will amaze, astound, thrill...and terrify.

An ancient evil thirsty for lost souls. A very different kind of taxi service with destinations not on any known map. Three coins that grant the bearer's fondest wish, and a father whose crippling grief gives birth to something dark and hungry.

Every town harbors secrets. Kevin Ellison is about to discover those that lurk in the shadows of Clifton Heights.”

"Through a Mirror, Darkly serves as Kevin Lucia's early-warning system to the horror field - Brace yourselves, folks." - Gary Braunbeck, Bram Stoker Award-winner of To Each Their Darkness, Destinations Unknown, and the forthcoming A Cracked and Broken Path
“Literate and stylish, yet fast-paced and accessible, Through a Mirror, Darkly is a thoroughly engrossing read. Kevin Lucia is a major new voice in the horror genre.” – Jonathan Janz , author of The Nightmare Girl

"He is a skillful guide through Clifton Heights, telling tales of mystery and horror in a town where dark secrets and ancient evils lurk to prey upon those who read Through a Mirror, Darkly." – Rena Mason, Bram Stoker Award® winning author of The Evolutionist.

“With Through a Mirror, Darkly, Kevin Lucia proves once again that it’s only a matter of time before he’s one of the genre’s biggest names." – James Newman, author of The Wicked and Animosity

Through a Mirror, Darkly follows on the success of Lucia's Things Slip Through collection.


Click here to buy Through a Mirror, Darkly from Amazon
Posted by Michael Brookes at 13:19