I'm a big fan of Neal Asher, in fact he's one of my favourite contemporary science fiction authors, so I looked forward to reading his latest and I'm pleased to report that it's a damn fine read. It sees a return to his Polity universe, and while I enjoyed the Owner trilogy a lot, the Polity has seen some superb stories and its great to visit the universe again.

The story centres around a black AI and machine intelligence is something that the author excels in telling stories about, in fact for me, only Ian M Banks did it better with his minds. There are some similarities to the Culture in the Polity, although only on a superficial level. The Polity is a darker and more brutal universe and some of the alien life is truly fantastic.

Another aspect of his writing I enjoy is how he takes a quite personal story (or a few in this case) and wraps it into a deeper story, and often with far reaching implications, while still retaining the intimate feel. There is a diverse array of characters in the story, and all relate in various ways to the machinations of the rogue AI.

The plot builds piece by piece and evolves at a decent pace, yet still creating a mystery of where it's heading. I really like that in a book, as usually I find that I suss the direction of the early on and here I enjoyed a few surprises along the way.

If you're new to this author's work then I'd advise reading some of the other Polity novels first, otherwise there's a few references in here that will slip you bye. If you're already a fan then this is like welcoming back an old friend. 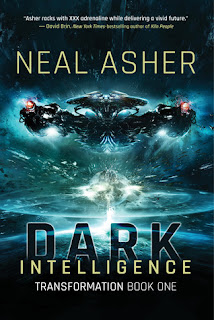 One man will transcend death to seek vengeance. One woman will transform herself to gain power. And no one will emerge unscathed....

Thorvald Spear wakes in a hospital to find he's been brought back from the dead. What's more, he died in a human vs. alien war that ended a century ago. Spear had been trapped on a world surrounded by hostile Prador forces, but Penny Royal, the AI inside the rescue ship sent to provide backup, turned rogue, annihilating friendly forces in a frenzy of destruction and killing Spear. One hundred years later the AI is still on the loose, and Spear vows for revenge at any cost.

Isobel Satomi ran a successful crime syndicate, but after competitors attacked she needed power and protection. Negotiating with Penny Royal, she got more than she bargained for: Turning part-AI herself gave Isobel frightening power, but the upgrades hid a horrifying secret, and the dark AI triggered a transformation that has been turning her into something far from human….

Spear hires Isobel to track Penny Royal across worlds to its last known whereabouts. But he cheats her in the process and quickly finds himself in her crosshairs. As Isobel continues to evolve into a monstrous predator, it's clear her rage will eventually win out over reason. Will Spear finish his hunt before he himself becomes the hunted?

Dark Intelligence is the explosive first novel in a brand new trilogy from military SF master Neal Asher and a new chapter in his epic Polity universe.

Posted by Michael Brookes at 22:25