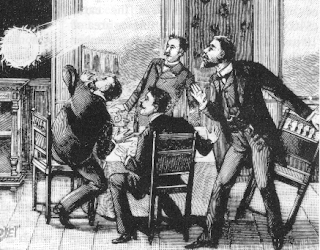 Picking the winner's for October's Short Fiction Contest proved to be a tricky task. The image inspired some diverse and wonderful stories and I think you'll enjoy the three stories I've selected. Thanks to everyone who submitted their stories - I enjoyed reading them all! Thanks also to everyone who shares the links to these contests, please continue to do so, these writers deserve their stories to be shared.

And here are the winners:

Congratulations to the winners and here are their stories:

The four of us had looked after our good friend, Jonathan, for the past several weeks while he lay in bed suffering from the fever.  It had taken his wife as well as half our city council and a rather large handful of local residents.

Per the physician’s orders, we were to remain on the bottom floor of our friend’s house while he was cared for on the second.  We were to never go upstairs.  There was talk of extreme contagiousness and no medical personnel had yet been able to determine the exact cause of the epidemic or how it was transferred.  We had all agreed that, at the very least, we would remain in the house to see our friend through to the end, thinking perhaps any positive energy omitted from us would bring healing to his dying bones.

During the wee hours, the physician woke us and shared the grim news that our dear friend would most likely not see another day.  He would die before daylight.  The physician then went back upstairs to care for Jonathan.  An hour later, Thomas, the most curious and daring among our group, ascended the stairs and peeked in Jonathan’s room.  The physician was slumped over in a chair sleeping soundly, and our friend lay motionless on his bed.  There was no sound of breathing; no evidence of respiration.  Thomas then reported to us that Jonathon had passed.

Through the next hour, my companions and I gathered around the dining table and shared fond memories of our friend, when one of us spoke of a séance—to call upon the spirit of our friend and offer a final goodbye and perhaps find closure.  Surely there would be no closure in cowering a floor below while our friend deteriorated above.

Vincent, the scholar between us, held the ceremony.  We followed his strict instructions and soon found ourselves calling upon the ghost of our recently deceased friend.  When speaking to the spirit world, Vincent seemed to struggle making communication.  He broke into a profuse sweat until at last a ghastly, luminous sphere tore down the stairs, circled us, and promptly exited out through the window.

Seconds later the physician descended the stairs and shared with us some very chilling news.

“I crept up and saw that he was no longer breathing.  You were asleep,” Thomas told him.

“Sir, I’m afraid that your speculation was false.  He passed only minutes ago.  Within the hour I watched as Jonathan’s fever miraculously broke to the point where I became optimistic regarding his recovery.  He had become nearly coherent.  But then only moments ago he took a turn for the worse.  I could see him struggling to stay with us.  But it was as though something called him, pulling him to the other side.  Something he could not fend off. “

The Earnest Discussion by Tim Robson

“We are all men of science, I assume,” said Gerald.

The company agreed that they were.

“And that our goal is to seek answers, wherever they lie or whomever they may upset.”

Again there was a general murmur of agreement.

“Well gentlemen, allow me, if you will, to demonstrate something that I feel will engage you at this late hour.”

Gerald lit his cigar. His best friend and erstwhile colleague Giles did likewise. Humphrey and Frederick contented themselves with another glass of port.

“These past years, I have been conducting experiments into the very nature of existence. If you will, an enquiry into life itself.”

“Steady on, old chap, that’s damned heresy!” exhorted Humphrey. He was the newest member of the dining club and still clung to some of the old ways.

“Correct, my friend, as a man of science,” Gerald emphasised the word, “We must allow our investigations to go wherever they wish. Science is the pursuit of fact, not belief. But neither is it a substitute for morality.” Here Gerald waved his cigar in front of him. “Both religion and science can happily co-exist.”

Gerald looked at his three companions. Were they ready for what he was about to reveal?

“Gentlemen. I have conducted experiments combining electricity with physical chemistry. I have been searching these many years for a key that would unlock inert matter and create life itself!”

There was a general unease around the table as his three companions digested this unexpected news. Gerald pressed on.

“Life can be created. I can ape the mannerisms and powers of God!” he announced grandly.

“It’s too late. Here is life!” shouted Gerald and clicked his fingers.

“Here is life!” he clicked his fingers again with the same result. The four men looked at each other sheepishly.

Out in the stalls the audience tittered a amongst themselves and rustled in their seats.

Above the stage came a tremendous noise as Bob, the principle lighting director, realised he’d missed his queue with the Number One bright light. He kicked it roughly into action. This tilted the light dangerously and sent the harshest beam possible not into the air, as rehearsed, but right over the heads of the four actors.

“Bloody hell!” shouted the actor playing Humphrey whose head was closest to the beam. “Turn that thing off!”

Above him, Bob tried to do that but Number One light tumbled from its precarious position over the stage and down into the orchestra pit. Bob, holding on for dear life, fell along with the light.

There was an eerie silence in the theatre as everyone waited for signs of movement from the orchestra pit. Slowly, painfully, Bob lifted himself and his confused face looked up at the audience.

It was Ludo night at Portermonger's. Finch-Finchley had just succeeded in setting up a rather cunning 3-way block just before the green exit ramp, and the mood was tense.

The four of us were in competition for a rather fine bottle of vinegar I had set my heart on after its recent appearance in the good Professor Barnfather's collection, and until that point I had thought myself to be winning. The GPB had promised to join us later in the evening to present the prize and also share some 'Rather exciting news.'

Portermonger had just left the table to call for cigars when I noticed a shifting light in the darkening garden beyond the French windows - a glowing yellow ball floated forth from among the Begonias and made its way up the bank towards us. Before I could share my wonderment with my friends, however, the doors crashed open and the ball entered the room.

We reacted in our different ways:  Finch-Finchley ducked to avoid the initial attack and Portermonger grabbed  the first thing to come to hand to use as a weapon – the chair he had been sitting upon. Standable, having spent the evening with a drake glued to the palm of his right hand -ostensibly to treat a crick in the bird's neck,  but really to provide the punchline to the extended  'Making a duck understandable' anecdote he'd been failing to share all evening - was no use to anyone not wanting to stuff a pillow. It should have been down to me to defend the Portermonger homestead, for normally I never leave home without the cricket-bat-and-butterfly-net combination which had rescued us during the many trans-dimensional incursions brought about by our experiments testing the fabric of the multiverse, and I saw Finch-Finchley glance expectantly in my direction. I shrugged and saw panic enter his soul.

The sphere came to a bobbing, slowly rotating standstill before the fireplace, and we crowded forward  to examine it more closely. It looked to be a crystalline shell containing barely tamed energy, the nature of which was completely beyond my understanding. I felt no heat from the glowing orb, but could hear a highly-pitched hum or buzz coming from it.

Standable's duck now showed its distress, making a enough noise to force the foolish man to retreat to the open doors which he awkwardly closed with his free left hand. Thus momentarily distracted, we almost failed to notice the changes by the hearth: the crystal had begun to grow, and the energy field contained within changed colour from yellow to orange to a sparkling shade of deep red. The hum was also altered, performing a slow glissando to a lower register.

At last the shell burst, to reveal a smiling GPB wearing a rather fetching red evening dress and holding bottles of champagne and fine vinegar. Her endeavours in matter transferral had been successful.

We certainly hammered some hamsters to the wall in celebration that night!
Posted by Michael Brookes at 14:16