As part of her blog tour celebrating the release of her latest book 'Famous Animals' Katie Stewart has written a blog post about how she created the charming illustrations in the book:


Maybe in a bid to prove to the world that I’m not as old as I look, the illustrations for Famous Animals Volume 1 were all done digitally. Until recently, (ie. the past few years) my illustrations were entirely done by hand. Occasionally, I’d do a drawing or painting, scan it onto the computer and enhance it in Photoshop. However, I found trying to draw with a mouse close to impossible. I would look longingly at drawing tablets, but they were all so expensive. Then a couple of years ago I decided to treat myself to a Wacom Intuos Pro, courtesy of Ebay. The Intuos Pro is a wonderful thing, but it demands great hand-eye coordination, something I found quite difficult with the tiny screen on my laptop. So I splurged some more and bought a large monitor. After using that for a while, I realised that my one reason for not buying the smaller Wacom Cintiq – the smallness of it – was no longer an issue. With a large monitor I could use the Cintiq to draw straight onto when I wanted detail or use it like an Intuos with the monitor if I wanted to do bigger work. So I broke the piggy-bank completely and bought a Cintiq 13HD and so begins the story of how I illustrate…

The illustrations for Famous Animals each started with a very rough sketch, each on a 12 x12in transparent ‘canvas’ (in Photoshop). The sketches were based on images I’d found of the historical figures and animals on Google. Most of the pictures only required sketches of the figure. Only a few needed details for the background.

Once I had the sketch to my liking, I’d add a layer underneath the sketch and begin to add my colours using a basic brush. I use mixer brush a lot to achieve form and shading, again mostly a basic brush, though sometimes I use a feather of fur brush to add texture. I find it a bit like sculpting.

When I was satisfied with the rough colour image, I’d turn off the original sketch layer and begin to add details. Some of the illustrations required a lot more layers than others. I tend to work with lots of layers because 1. It’s not so much work to redo if I muck it up and 2. It allows finer control over any adjustments or blending I might want to do. I think Joan Aardvark and Henry the Apeth probably had the most layers as their ‘costumes’ were very detailed. Each piece of Joan’s armour and weaponry was done as a separate layer and then the detail on the armour was another layer again. I used a style which made it slightly 3D metallic to add some depth to the picture. With some of the animals, I used a fur filter and cropping mask for added realism.

The background was the last thing I worked on, again a new layer under all the others. Generally, I made these fairly simple so that they didn’t detract from the figure, but with some of them, like Henry the Apeth, I wanted to set the figure in time and space, so I added more detail. Some of them have texture filters to add interest or the ‘oil painting’ look.

All this work was done in RGB colour, but to submit them to IngramSpark for printing, I had to convert them to CMYK with less than 240% saturation, which was a bit of a nuisance, but I think I managed to keep the colour pretty well as good as it was in RGB. I also reduced each one to just over 8 x 8 inches to fit the trim of the book. I would really have loved to have done a book that catered for the 12 x 12 paintings, but unfortunately IngramSpark didn’t have anything that big that allowed premium colour. Still, it will allow me to do prints on a larger canvas and maybe one day I’ll do a bigger book. I have plans for more in the series, hence ‘Volume 1’. 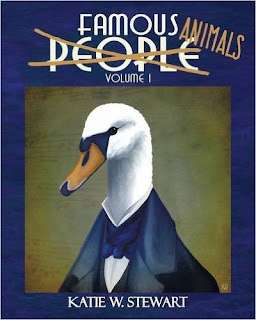 What happens when you combine a love of art, animals and history with a sense of humour? You get a book that is delightfully different. Famous Animals is an alternative history, an artistic peek at the world of such remarkable animals as Felix Mendelswann, Joan Aardvark and Luciano Pavaratti. At the same time, it takes a biographical look at some equally noteworthy humans. A book that will appeal to young and old alike.