This is an interesting short story about a father and daughter alien that collect other species. The idea is a fun one, but it's over before you know it. It is well written, but this something I would have expected to have come as part of a longer collection rather than on its own. 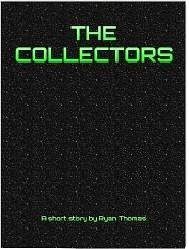 "I've caught another one!" Elizabeth shouted.
"Well done," her father replied. "How many have you got now?"
"Seventeen."
"That's two more than I have."
"They are funny little things, aren't they?"
"Yes, Elizabeth, they're quite peculiar."
Elizabeth peered into her jar. "I can't tell which ones are male and which are female."
"It's not easy but with a little experience you'll soon be able to. When we get home I'll show you how to asphyxiate them and you can put them in your new display cabinet."
"Daddy, what did you say they are called again?"
"Humans, Elizabeth, they're called humans."

Click here to purchase The Collectors from Amazon (it's a fun, but very brief read)
Posted by Michael Brookes at 09:58