I was recently asked what my favourite Neil Gaiman book was an I immediately picked American Gods (although Good Omens is hot on its tail), I then realised that I hadn't read it for a few years so I decided to give it another read. I'm pleased I did as it was actually better than I remembered. I know that this book has been criticised as a piece of writing, primarily because it does feel quite indulgent. Personally it's part of the charm for me, it fits the journey that is the core of the story.

And what a story it is. It has a marvelous scope and an interesting take on the meaning of being a god. Great as the story as, it was the characters and their interactions that stood out more than the plot. The vision of the blend of normal and paranormal provides some fun insights.

The Kindle version has some extra text that was removed from the original release, to be honest I don't remember the text well enough to comment on whether it adds or detracts. It didn't feel over long, in fact I would have happily continued reading more about what happened. This was a great read and even better the second time round. 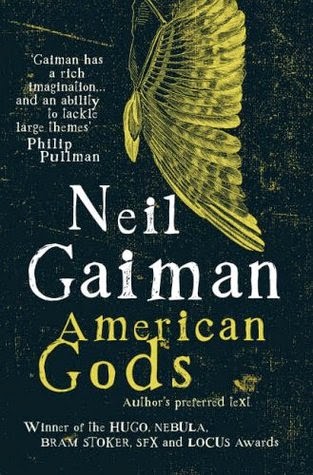 Days before his release from prison, Shadow's wife, Laura, dies in a mysterious car crash. Numbly, he makes his way back home. On the plane, he encounters the enigmatic Mr Wednesday, who claims to be a refugee from a distant war, a former god and the king of America.Together they embark on a profoundly strange journey across the heart of the USA, whilst all around them a storm of preternatural and epic proportions threatens to break.Scary, gripping and deeply unsettling, AMERICAN GODS takes a long, hard look into the soul of America. You'll be surprised by what and who it finds there...This is the author's preferred text, never before published in the UK, and is about 12,000 words longer than the previous UK edition.


Click here to purchase American Gods from Amazon
Posted by Michael Brookes at 16:28