I loved the first book in this series, the second book in particular is a hard book to follow. While it doesn't quite reach the highs of that book, it's still a damn fine read and sets the story up for the conclusion. In that respect it reflects the pattern of the first two books.

The story is set a few hundred years after the conclusion of the second book, and while the universe has changed in many ways there are still common elements. It's told from two main perspectives. The first follows that of the main protagonist, who is charged with protecting a girl who is believed to be the saviour of the world.

It's an official of the ruling combined church and state who is charged with the apprehension of the young lady, and so sets up the core of the story. The first book was the journey of the pilgrims that set the stage for the second. And a similar construct is used here, with the chase providing the journey. Along the way we see how different the universe has become. In some ways it has progresses, and in many others regressed from the almost technical utopia of the past.

Unfortunately the story suffers from the same flaw as the first book. It touches upon mysteries that offer some deeper understanding, and I would have loved to learn more about them. Assuming that pattern continues then I expect those questions will be answered in the final book. WHich I'm very much looking forward to reading! 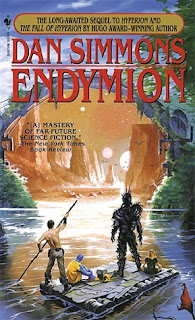 The multiple-award-winning SF master returns to the universe that is his greatest success--the world of Hyperion and The Fall of Hyperion--to tell a story of love and memory, triumph and terror in a novel even more magnificent than its predecessors.