This book certainly starts with a bang. The tight writing and abrupt events carry the introduction and served to really peak my interest. Unfortunately it loses its way a little bit after that point. It then meanders for a while with the backstory for the family the form the core of the story. There's a mystery here to the wife's death that is never adequately explained, and so feels like a convenient excuse for a set of circumstances. The odd co-incidences don't stop there, for example there is a lottery win that means that despite the death of his spouse he is financially independent, and so able to make the trip to investigate strange goings on up in Alaska.

Another oddity that put me off was the daughter. She seemed much older in her mannerisms than her age of six would suggest. I'm assuming there's some significance to that behaviour, but I found it off putting. The pacing also struck me as strange, it occurred in savage bursts with fairly lengthy development in between, and then it all ended in a rush.

Beyond those issues the story was predictable, but did have some decent development, and was a solid read despite my issues with it. The quality of writing was good, enough to carry the problems. I believe this is the author's first novel, and assuming this to be the case then this is a strong debut and hopefully the author will develop their story telling craft in future tales. 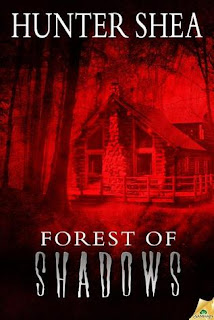 John Backman specializes in inexplicable phenomena. The weirder the better. So when he gets a letter from a terrified man describing an old log home with odd whisperings, shadows that come alive, and rooms that disappear, he can’t resist the call. But the violence only escalates as soon as John arrives in the remote Alaskan village of Shida. Something dreadful happened there. Something monstrous. The shadows are closing in…and they’re out for blood.


Click here to buy Forest of Shadows from Amazon

Posted by Michael Brookes at 17:26