And so my quest to watch the Hellraiser sequels continues, although up until now I've been mildly surprised, don'y get me wrong they're not great, but have been watchable. Until I watched this one. My interest was piqued when I saw Lance Henrikson's name on the credits as he's usually entertaining to watch, but while he is the best part of the film he isn't enough on his own to lift it.

The main issue is that it's fairly standard horror with the Hellraiser element being little more than branding for a fairly pedestrian series of deaths. The setup was mildly interesting in that there is an online game based on the cenobite mythos, winning the game grants an invitation to a Hellworld party and it's at the party that the victims meet the host, played by Lance Henrikson.

There are a few twists along the way, but for the most part it lacks imagination. The cenobite appearences are little more than slasher murders and lack the disturbing pain/pleasure combination that the series is famed for.

Eventually we reach the end and there's a series of reveals that managed to raise an eyebrow, but only in congratulation to myself at predicting their occurence. I've not watched them all, but for me this is the worst Hellraiser sequel yet. 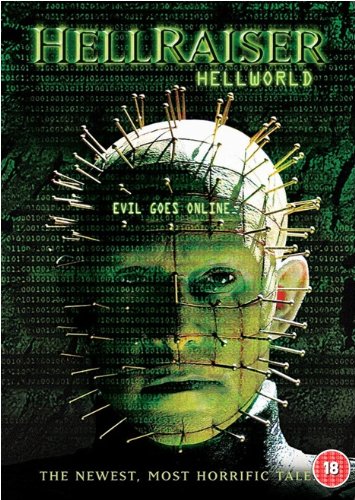 A group of role-playing gamers' fantasies turn horrifyingly real in this, the eighth instalment in the 'Hellraiser' franchise. Not best pleased when teenage fans construct a virtual online 'Hellworld', Pinhead (Doug Bradley) invites the group to a suitably themed party, where he quickly sets about turning their reality into a nightmare they'll never forget.


Hellraiser: Hellworld is available from Amazon (and isn't a very good watch)